The proposed Founders' Memorial could have displays on how the pioneer generation and its leaders contributed to the country's development, Singaporeans interviewed yesterday said.

But some said it should also be a multipurpose space, with activities and regular programmes for young and old, locals and visitors.

These were the broad findings from a street poll of 50 Singaporeans yesterday, a day after a committee in charge of conceptualising a memorial suggested two possible sites: Fort Canning Park and Bay East Garden at Gardens by the Bay.

Many also associated the memorial with founding Prime Minister Lee Kuan Yew, who died on March 23 last year, and his team of leaders who helped develop Singapore.

Support for both Founders' Memorial sites

Although those polled were evenly split on their preferred memorial site, a good number across the age groups envisioned it as a simple space where people could walk around and view displays on the founders, and contemplate their ideals, values and contributions. 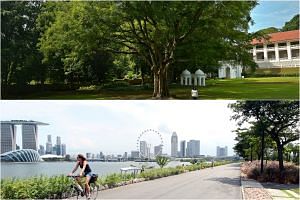 "My impression of the memorial is that it will be simple, with plaques and descriptions commemorating our founders," Ms Kimberley Aw, 19, who is waiting to enter university said, adding that people like Samsui women and foreign workers should also be thanked for their contributions.

Sales executive Roby Liwangitan, 58, said that while he preferred Fort Canning as the site due to its historical significance, he felt Bay East Garden would allow exhibits to be better displayed.

Several felt the memorial should also host activities for people to learn about the founders and their values.

Others said the memorial could bring students' understanding of Singapore's early years to life.

Executive Tan Wei Lin, 23, said schools could take students on trips there, and having video clips, among others, will make visiting it a more attractive experience.

Even as the Founders' Memorial Committee continues to gather public views about its content and concept, it is clear there is no shortage of ideas on how to keep the founding leaders' ideals and values alive.

A version of this article appeared in the print edition of The Straits Times on March 16, 2016, with the headline 'Many feel memorial should have exhibits and activities too'. Subscribe
Topics:
More
Whatsapp Linkedin FB Messenger Telegram Reddit WeChat Pinterest Print Purchase Article Copy permalink