The Ministry of Manpower (MOM) has started a review of laws on workplace safety and aims to complete the exercise by the end of the year.

It is looking at enhancing deterrence against worksite accidents, improving the industry's learning from such accidents through the release of accident reports, and raising the maximum penalties for offences that result in serious injuries or deaths.

Minister of State for Manpower Sam Tan spoke about the review of the Workplace Safety and Health Act in Parliament yesterday, in response to a question from labour MP Desmond Choo (Tampines GRC).

His comments come after a viaduct under construction at the Pan Island Expressway (PIE) collapsed last month, killing one worker and injuring 10.

More than 10 MPs asked parliamentary questions about the worksite accident at the sitting.

Responding to the questions on workplace safety, Mr Tan said that fatalities from construction site accidents have fallen. 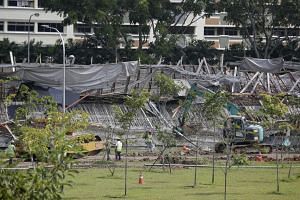 Probe into PIE viaduct collapse to conclude in Oct

There have been four deaths so far this year, compared with 24 last year and 27 in 2015. He added that the MOM has stepped up enforcement checks at construction sites, and has conducted about 16,000 inspections a year.

Besides this, the ministry also has a demerit points system and a blacklisting regime, Mr Tan said.

Since 2015, the MOM has issued demerit points to 223 companies for safety violations.

Among them, 25 were barred from hiring foreign workers until they improve their safety record.

In May last year, the MOM also enhanced the blacklisting regime for construction companies, said Mr Tan. Companies are now put on a "Business Under Surveillance" programme immediately after a worksite death occurs.

There are now 25 companies on the blacklist, and they are supervised by MOM closely until they have fixed their safety lapses, including putting their workers through refresher safety training.

One of the companies is Or Kim Peow Contractors (OKP), the main contractor of the PIE viaduct project.

A fatal accident had happened at the company's Yio Chu Kang flyover worksite in September 2015, but it was not immediately blacklisted then, said Mr Tan, adding that this was before the MOM tightened its blacklisting regime in May last year.

"MOM inspected all of OKP's worksites to check if the accident reflects a wider and systemic failure of the company's safety management. However, no evidence of systemic safety lapses were found from the inspections," said Mr Tan, explaining why the company was not put on the blacklist after the worksite death.

He said safety regulations and laws are reviewed regularly to keep them updated, and added that the MOM will continue to monitor developments and refine its regulatory framework.

"If there is a need to further tighten, we will continue to do so," he said. 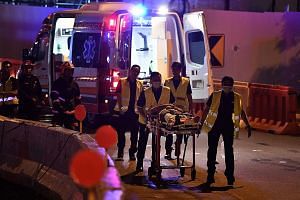