SINGAPORE - The labour movement will step up efforts to help workers build their skills and encourage employers to raise productivity, so that workers can continue to get good wages, labour chief Chan Chun Sing said at the annual May Day rally on Sunday (May 1).

"It is not about asking people to give us extra salaries and extra benefits just because we ask," said Mr Chan, who is secretary-general of the National Trades Union Congress (NTUC).

"It has to do with a lot of background work behind the scenes in trying to lift the productivity of our workers so that they can enjoy a good salary to provide for their families."

The unions will also work with post-secondary education institutes, institutes of higher learning and private service providers to increase the number of up-to-date training modules for workers, said Mr Chan, speaking to unionists at Downtown East.

At the same time, unions must mobilise working people to make use of the available resources, such as the $1 billion worth of SkillsFuture Credit, to upgrade their skills and help themselves.

"There is no point in the Government putting $1 billion in the kitty if we are unable to mobilise (workers) to do what's right," he said. 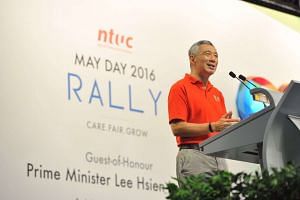 The Government is also contributing through policies such as the Inclusive Growth Programme (IGP), which has been extended for "a few more years", Mr Chan announced.

The $100 million fund supports technology adoption and redesigning work processes, such as centralised dishwashing in the cleaning sector and remote monitoring in the security sector, which can help low-wage workers earn more as they take on higher-skilled roles.

Besides focusing on training and productivity in the year ahead in order to raise wages, NTUC will work on providing a safe environment for local and foreign workers as well as fair avenues for dispute management.

Mr Chan said NTUC is also growing its network to represent workers in more industries and job levels, and trying to improve communication between leaders and members.

"The bigger we are the tighter we must be," he said.

A new leadership council will be formed, led by NTUC deputy secretary-general Heng Chee How, to support leaders in the unions and associate groups.