But Manpower Minister Lim Swee Say and Minister in the Prime Minister's Office Chan Chun Sing, who is also the labour chief, reassured workers that more is being done to match them to better jobs, provided they themselves step up and go for training.

They were responding to the dismal figures in Thursday's labour market report, which show rising unemployment and layoffs in the first half of the year reaching a seven-year high. Job vacancies also dropped below the number of job seekers for the first time since 2012.

Mr Chan, who is secretary-general of the National Trades Union Congress (NTUC), told reporters at a human resource dialogue that the next six to 12 months would be challenging, owing to the global slowdown and disruptive forces in the domestic economy.

Mr Lim, speaking to reporters at a career fair at the Devan Nair Institute, said his ministry is prepared for the worst. As industries transform swiftly, the pace of retrenchment may quicken, he said.

But he stressed that Singapore cannot stop its restructuring efforts. Otherwise, it will continue to depend heavily on foreign labour and be unable to create the types of quality careers Singaporeans want.

The major problem in the labour market, however, is job mismatch.

As for NTUC, Mr Chan said it not only plans to train displaced workers to match them with the appropriate jobs, but it also wants to reach out to workers whose jobs may be in danger in time to come.

"We need to do this ahead of time, to identify their skill set that can be transferred to new job opportunities," he said.

This, he said, is the most challenging task. "We are all humans.When we are doing our job, it is very difficult to think of the next job we may need to look for," he added, 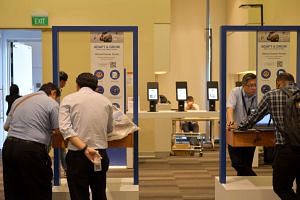 NTUC will work with government agencies, companies and industry bodies to look at areas of growth and identify, at least six months in advance, where new jobs may be created. "All of us would like to go for training if there's a clear job prospect," he said. But if people cannot make informed choices about what to train in, generic calls to upgrade will be ineffective, he added.

Workers, too, need to do their part. Said Mr Lim: "Our efforts aren't enough. We need job seekers to step forward to join the platform we are creating and, more importantly, be prepared to adapt."

Mr Chan encouraged workers to always bear in mind that their jobs could become obsolete at any moment. "We don't want any of our workers to be complacent, to think their current skill set, their current jobs, will last for ever."

A version of this article appeared in the print edition of The Straits Times on September 17, 2016, with the headline 'Tough times ahead but workers to get more help'. Subscribe
Topics:
More
Whatsapp Linkedin FB Messenger Telegram Reddit WeChat Pinterest Print Purchase Article Copy permalink