A longer job search is becoming more common among some groups of workers, as economic uncertainties and restructuring continue.

Worst off are the PMETs, or professionals, managers, executives and technicians, who form the majority of those laid off, according to Manpower Ministry (MOM) figures released yesterday.

The uphill task faced by the jobless is reflected in the long-term unemployment rate for residents, which crept back up to an eight- year high of 0.8 per cent in March.

It is also seen in the share of local residents, including permanent residents, who can get a job within six months of being laid off.

This rate in the first quarter of this year slipped to 64.4 per cent, against 64.7 per cent in the fourth quarter of last year.

The rate for the hard-hit PMETsfell to 60.6 per cent. Their rate has generally been on a downslide sincethe third quarter of 2015. 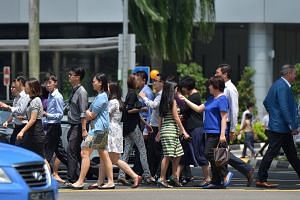 United Overseas Bank economist Francis Tan thinks it is likely that the long-term unemployment rate will go up further as economic growth in the first quarter was neither broad-based nor led by the service sector, which employs the bulk of the workforce.

Moreover, he added, these out-of-work residents tend to be further disadvantaged because "usually, the short-term unemployed would get employed first".

Other statistics also point to a weaker demand for workers.

After accounting for seasonal variations, the number of vacancies fell to 46,800 in March - the lowest level in at least four years.

Also, the average monthly recruitment rate slipped to 2.1 per cent in the first quarter of the year, down from 2.4 per cent a year earlier.

The uneven economic growth also means that job prospects in some sectors are dim, while other industries are hungry for workers.

MOM expects more new jobs in sectors such as finance and insurance, information and communications, healthcare and some parts of manufacturing, including biomedical manufacturing, precision engineering and electronics.