Six workers who suffered permanent injuries from workplace accidents have received compensation above the current cap of $262,000, said the Manpower Ministry (MOM).

The ministry has the power to apply a little-known formula where workers who suffer total and permanent disabilities can receive compensation that is 25 per cent more than the cap prescribed in the Work Injury Compensation Act.

Some 13,000 workers were injured at work last year. About 60 per cent were foreigners.

Mr Meng Xiangbo, 39, a construction worker from China, was one of the six who received higher compensation - he got $327,500. He was crushed by a concrete slab at a construction site last September, and the accident left him paralysed from below his waist.The MOM said it pushed the insurers not to delay Mr Meng's work injury claim and that he received his compensation five months after the accident. 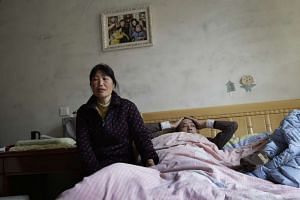 The ministry also set the precedent of paying for the plane ticket of social worker Jeffrey Chua, who accompanied Mr Meng home to China. Said Ms Kee Ee Wah, MOM's director of work injury compensation: "We empathised with his plight."

Mr Meng's former employer, Ban & J Construction, is being investigated for the accident.

Mr Chua, who works for non-governmental organisation HealthServe which provides healthcare services to foreign workers, said the excess compensation is typically given to workers with spinal cord injuries that leave them paralysed. "I have come across a few such cases in the past few years," he said.

The amount of compensation given to injured workers looks set to increase, as MOM reviews the caps every three years so that payouts can keep up with medical costs. The next review can be expected as early as 2019.

Meanwhile, MOM's Ms Kee said it is important for employers to continue providing work injury insurance coverage to their staff.

"The insurance not only provides for workers, but also reduces the financial burden of medical expenses employers may have to bear due to accidents at work," she said.