Economists say there are signs labour market is tightening, which could mean better wages

After six years of rising retrenchments, fewer workers were laid off last year - an improvement seen in both the local and foreign workforce.

But in certain industries, locals, who comprise Singaporeans and permanent residents, were more vulnerable to losing their jobs than foreigners.

This was the situation in industries such as infocomm technology (ICT), electronics manufacturing, petroleum products manufacturing and real estate, where the local share of retrenchments was higher than their share of employment.

The labour market figures for last year released by the Ministry of Manpower (MOM) yesterday show that overall, locals made up 67 per cent of employed people, excluding maids, last December.

Economists said some of the industries, where proportionally more locals were asked to go, have undergone restructuring. "I don't think it is due to any particular discrimination against locals in these sectors," he added.

In terms of occupational groups, local professionals, managers, executives and technicians continued to form the bulk of those laid off.

Their share of retrenchments has grown at a faster rate over the last decade than their share of the resident workforce. Last year, they made up 72 per cent of those laid off, while they comprised 57 per cent of residents in employment. 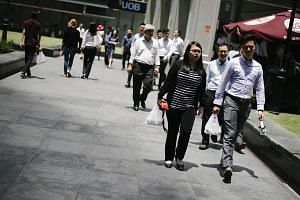 In particular, they were mainly retrenched from service industries such as financial services, wholesale trade and professional services, said the MOM report.

National Trades Union Con-gress assistant secretary-general Patrick Tay said the reason could be that these three industries see heavy churning in terms of job losses and job gains owing to digital disruption and automation, though overall job opportunities there are growing.

His advice: "Workers should look at developing the in-demand skills for in-demand jobs in the sector. They can also look for opportunities outside the sector in adjacent industries where the skills needed are similar to those they have."

On the bright side, most retrenched residents found new jobs within six months. This rate of re-entry into employment was about 65 per cent, similar to the rate in 2016, although older workers and degree holders had lower rates.

Another plus for jobseekers is that the ratio of vacancies to unemployed people rose to 0.92 in December, after taking into account seasonal variations.

Economists said this shows the labour market is tightening again, which means employers face stiffer competition for workers and hopefully, it will result in better wage growth this year.

"It is a happy outcome for workers, but not so for businesses," said UOB economist Francis Tan, who cautioned that if employers cannot get enough talent, whether local or foreign, Singapore may miss out on the opportunity to ride on the upcycle of economic growth this year.