SINGAPORE - Seventeen workers died from workplace accidents in the first half of 2019, the fewest since 2006 when the National Workplace Safety and Health numbers were first made available to the public. This is an improvement from last year which saw 18 cases in the same time period, out of a total of 41 for the whole year.

Companies must continue to be diligent as the construction sector expects a slew of mega projects, which in turn means bringing in more workers, said Manpower Minister Josephine Teo at the Workplace Safety and Health Awards at the Resorts World Convention Centre on Tuesday (July 30).

"Building a strong safety culture takes time," said Mrs Teo. "Our workplace safety and health improvement was only made possible because our tripartite partners were driven to enhance the livelihood and working conditions of our workers."

Companies should dedicate more resources to new and inexperienced workers who face a higher risk of injuries, to help them adapt to their work environments, she added.

Employers should also stay diligent, as "workers who are assured of their employers' commitment to take care of their safety and health will be motivated to give their best at work".

Mrs Teo's speech highlighted several of the 168 award recipients out of 344 applicants, who had enhanced workplace safety and health. One of them was Kuan Aik Hong Construction, a 20-year-old company that has chalked up 1.5 million man hours (four years) without an accident. It received a Performance Award (Silver), its second so far.

To encourage workers to flag hazards as well as foster a no-blame culture, supermarket vouchers are presented monthly to its workers who report significant hazards.

Mrs Teo raised the example of 31-year-old Uddin Nizam, a site supervisor with the firm, as someone "never afraid to report near-misses for the safety of his co-workers".

Last year, Mr Nizam had found steel plates laid on soft ground, after rain overnight, covering an access ramp to an underground detention tank in an excavation site. It posed a safety hazard to ramp users. "Just as Nizam saw an excavator entering the excavation site, he quickly stopped all works and gathered the safety officers and site engineer to collectively review the site conditions," said Mrs Teo. 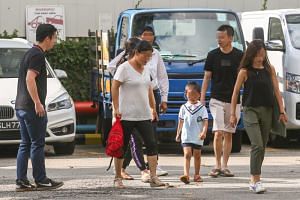 Help for companies to keep workers safe and healthy

The team then removed the steel plates, and also added reinforcements to provide more grip for the excavator.

"This shows how the no-blame culture at Kuan Aik Hong Construction encourages workers to stay vigilant and speak out on near-misses, even if there was some patience needed because of the work speed being adjusted a little," she said.

Keppel FELS received an Innovation Award for using a smart unmanned inspection robot to eliminate the risks of having a person work in a small, confined underground space to inspect the conditions of bus-bars.

Bus-bars, which power luffing cranes, have to be inspected regularly as corroded bus-bars can adversely affect crane operations.

The robot was also able to capture footage of the bus-bars' condition through an in-built camera, allowing the company to analyse footage and predict the likelihood of rusting, and replace the bus-bars before they weaken. This technology reduced the number of man-hours required to prepare and execute the inspection process from 303 hours to 13 hours, and only two men were needed instead of eight.