SINGAPORE - A mango tree in a private compound fell and smashed the rear windscreen of a car parked at Block 150 Kampong Ampat on Tuesday (June 6) morning.

According to a contributor to citizen journalism site Stomp, office workers in the area heard a loud bang and a group of passers-by helped move the tree from the car.

The tree was laden with fruit, and smashed mangoes were strewn on the road.

Eyewitness Sherbert Seah, a 32-year-old sales manager, told The Straits Times that the car was parked in his usual spot.

He was in another lot, preparing his parking coupons when the tree suddenly fell from a compound that appeared to belong to Goldlion, he said. 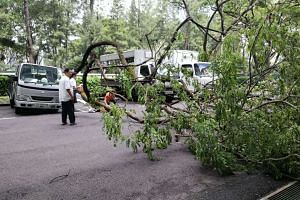 One hurt by falling tree at Yuan Ching Road carpark 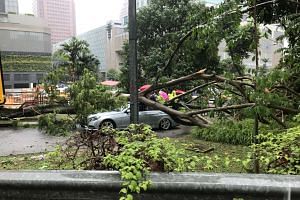 "It was very, very loud. The tree was an estimated two storeys high," he said. "Nobody was hurt - the tree just came down and hit the car. There was no strong wind or anything like that."

Mr Seah, who works nearby, said the mangoes were scattered on the ground and some passers-by, including bikers, stopped to pick up the mangoes.

He said workers were seen sawing the tree and removed it by 1.15pm.

ST understands that the tree is not under the National Parks Board's purview as it belongs in a private compound.

"It's a good thing I didn't park in my favourite spot," said Mr Seah.

Just last month, a large branch fell from a yellow flame tree and hit a car along Cairnhill Road. A traffic jam ensued. There were no reported injuries.

In another case at Yuan Ching Road in February, however, a woman was seriously injured after a tree fell on a lorry just as she was getting out of it.