It was after lunch when Mr Charleston Chua walked out of the cafeteria and collapsed on the ground.

His friend, Mr Peter See, immediately performed cardiopulmonary resuscitation (CPR) on him until the ambulance came.

"He wasn't breathing and he had already turned blue," said Mr See, 55. "I told myself that if I don't do anything, he'd probably be gone."

Mr See, an administrative officer at an IT firm, had picked up CPR skills during a diving course in 2015.

After that close shave three years ago, Mr Chua, 61, realised the importance of CPR.

A year after the incident, the operations manager at a food and beverage company proposed to his firm the idea of conducting in-house CPR and automated external defibrillator (AED) training for its staff.

He also suggested installing an AED on the premises.

"You don't use these skills every day, so you might lose touch with (them). It's good to have refresher courses so that people can feel confident when they actually have to do it," said Mr Chua.

Mr See was one of 41 people who were recognised at the Survivor Awards Singapore, held at the Singapore Expo yesterday, for helping to resuscitate heart attack victims. 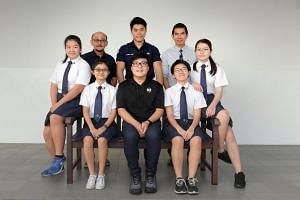 'I don't know how to thank my angels': 4 students commended for saving man who had cardiac arrest

'I just wanted to save her life,' says 15-year-old heroine who helped road accident victim

Among those who received certificates of commendation from the Unit for Pre-hospital Emergency Care were dispatchers, firefighters, paramedics and members of the public.

The awards ceremony, supported by the Singapore Heart Foundation (SHF), was held in conjunction with the latter's Project Heart event - now in its eighth edition.

The yearly initiative seeks to raise awareness about the importance of bystander CPR and the impact that learning CPR-AED skills can create.

An initiative by SHF to get more general practitioners (GPs) to purchase AEDs and learn how to use them to respond to out-of-hospital heart attacks was also launched at the event. So far, 11 clinics have come on board the AED Primary Care initiative.

"For every minute that nothing is done to resuscitate the victims, their chance of survival drops by 7 per cent to 10 per cent... GPs are a good resource for medical emergencies in the community, and we believe that there is... potential for primary care clinics to have an AED on-site."

Close to 800 participants aged between 11 and 75 also took part in a mass CPR-AED certification training session at the event.

Volunteer Eugene Seah, 24, has been a certified CPR-AED instructor since 2013.

The nursing student is one of about 57,000 community first responders registered on the myResponder mobile app. Through the app, he has attended to more than 10 calls for emergency help.

Launched in 2015 by the Singapore Civil Defence Force (SCDF), the app allows anyone in the community who is trained to perform CPR and operate AEDs to respond to cases within a 400m radius.

Mr Seah's first case involved a man in his 50s. He took turns with SCDF personnel already at the scene to perform CPR on the victim, whose pulse returned after two minutes.

"Time is... a crucial factor," said Mr Seah. "The ambulance took some time to arrive because of the peak-hour traffic. So it really depends on... bystanders to help."