Like many Pokemon Go players, National University of Singapore life sciences undergraduate Sean Yap, 24, goes out as often as possible.

But, unlike such gamers whose eyes are glued to their phones in an effort to catch the virtual characters, Mr Yap looks up and around - at plants, birds and, especially, insects. The insect researcher is now on a mission to get others to do the same and learn to appreciate local biodiversity, and his strategy is to ride on the current popularity of the mobile game.

He has produced a Facebook album - called Real Life Pokemon of Singapore - that shows the similarities between Pokemon characters and native plants and animals.The water Pokemon Staryu, for example, resembles the knobbly sea stars that dot Singapore's shores, and the plant Pokemon Victreebel looks like the Raffles pitcher plant.

Mr Yap's comparisons include a tongue-in-cheek write-up about the native plant or animal. 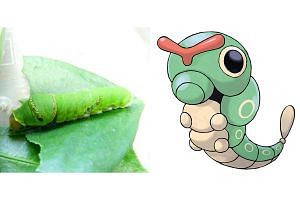 Native animals and their Pokemon equivalents

He says, for instance: "Like Victreebel, pitcher plants are living toilet bowls, complete with a lid and a disgusting rim/seat... Except (they) eat bugs. Some species of pitcher plants even have symbiotic, resistant insects that live in the liquid and feed on the drowned bugs, and the pitchers get the nutrients from their excrement, so they are actually toilet bowls."

He points out that numerous Pokemon are based on real plants and animals, many of which can be found in Singapore. City dwellers often do not realise this, he says, and he hopes his project will enlighten them and prompt them to look out for these plants and animals.

"If Pokemon Go can be used as a marketing tool for shopping malls to attract customers, then it can probably do the same for science and biodiversity," Mr Yap said.

Besides raising awareness of Singapore's native biodiversity, he wants to highlight the plight of wildlife too. For example, in writing about Sandslash, a Pokemon which resembles the critically endangered Sunda pangolin - which is native to Singapore - he says: "Unlike Sandslash, the pangolin's large claws are not used for combat but for digging into ant or termite nests. And while Sandslash's signature move, Defense Curl, may work against predators like tigers (before they went extinct here), humans can just pick them up.

"It is humans that make the pangolin such a rare Pokemon worldwide: Poaching is the No. 1 threat to their existence."

Project manager Adriane Lee, 41, said he never knew that real animals were the inspiration for Pokemon until he saw Mr Yap's album.

"Sean's project is a refreshing take on educating a person on local biodiversity, as Pokemon is the latest craze and the game draws audiences normally not knowledgable of or interested in nature to have a more intimate knowledge of the topic," he said.

Nature groups such as the Herpetological Society of Singapore, which studies reptiles and amphibians, also plan to use Mr Yap's project at the upcoming Festival of Biodiversity educational fair to be held at the Singapore Botanic Gardens next weekend. The society's co-founder Sankar Ananthanarayanan said: "We want to show that Singapore has biodiversity that is pretty cool too, and that appreciating wildlife is just as fun and interesting as playing the game."

If Pokemon Go can be used as a marketing tool for shopping malls to attract customers, then it can probably do the same for science and biodiversity.

Mr Yap has so far matched about 40 out of the 721 characters in the Pokemon universe with native flora and fauna. He hopes to do so for as many Pokemon as possible.

But unlike the Pokemon Go game in which the aim is to catch them all, he stressed that handling and capturing wild animals in Singapore is illegal.

He cautioned: "Do not try to catch them. Do observe and marvel from a respectful distance. You can join guided walks, many of which are free, for a higher chance of seeing these real-life Pokemon."

Although he has been a fan of the Pokemon universe since he was a boy, Mr Yap does not play Pokemon Go. In fact, he deleted the app barely four hours after he first downloaded it on the day of its launch.

"I realised I was walking in the forest and constantly checking my phone instead of looking out for wildlife," he explained.

During a recent visit to Pasir Ris Park for a glimpse of a rare spotted wood owl, Mr Yap said he saw many people who missed the majestic bird because they were busy catching Pokemon.

But getting people out in the open is a first step, he pointed out.

A version of this article appeared in the print edition of The Straits Times on August 26, 2016, with the headline 'Man on a mission to lure players to real-life Pokemon'. Subscribe
Topics:
More
Whatsapp Linkedin FB Messenger Telegram Reddit WeChat Pinterest Print Purchase Article Copy permalink