It was 3pm in Orchard Road and shades of silver, blue and purple appeared overhead.

But the shimmery scene did not cast a twinkle in secondary school student Adrian Wong's eyes.

"If I didn't look up and stare, I would have missed it," said the 17-year-old, who was at Ngee Ann City's Civic Plaza last week.

Like him, many shoppers have questioned the move to start the Christmas light-up in the afternoon instead of at 6.30pm in the past, with some calling it a waste of money. The first Christmas light-up in Orchard Road was in 1984 and lasted just 20 days, but it soon became a signature event for the shopping strip.

Themed Endless Wonder, this year's light-up spans a 2.88km stretch from Tanglin Mall to Plaza Singapura, and was officially launched by President Halimah Yacob on Nov 11.

It will run daily till Jan 1 - with the lights turned on until midnight, except for Fridays and Saturdays, when they will be on till 2am. The Chinese New Year and Deepavali light-ups typically start at 7pm.

Orchard Road Business Association (Orba) executive director Steven Goh said it chose to start the Christmas light-up earlier in the day to "maximise the design advantage of this year's decorations".

The team enhanced (the light-up) further with LED energy-saving lights that consume 10 per cent of the average (power usage) of a conventional lighting system. This explains why we decided to extend the light-up to 3pm this year... to present a different visual experience for visitors in Orchard Road, day and night.

The street's light decorations are created using mainly nylon and aluminium, while the 1,200 plastic baubles adorning the trees are painted with glitter. These lightweight materials can reflect light easily, he said, adding that it will give visitors a "different visual experience" in the day and night.

Mr Goh said the use of LED lights - a feature in Christmas light-ups in recent years - helps to reduce power consumption to just 10 per cent of a conventional lighting system. Orba said it hoped that an afternoon light-up would spur visitors to hit the shops earlier in the day.

But Straits Times Forum letter writer Chan Teck Guan disagreed. "Shoppers are very discerning. They will part with their money only when they see something they like and if it is a good bargain," he wrote. A 50-year-old Malaysian tourist, who wanted to be known only as Madam Chang, said: "I've seen more impressive decorations in previous years." 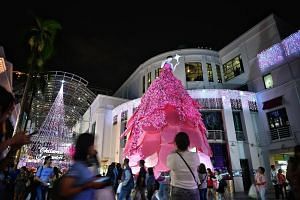 Malls all decked out for Christmas without spending more

However, housewife Aileen Goh, 51, thought the baubles with lights inside them were "a nice touch".

South African tourist Tex Williams, 63, said: "Even if I can't really see the (effects of the) lights in the day, it is still nice that there are some activities during the day."

For the first time, this year's celebrations in Orchard Road feature a Christmas Village, similar to traditional Christmas markets in Europe. It will be held for a month from Nov 25, and is co-organised by Sphere Exhibits, a subsidiary of Singapore Press Holdings.

Is it a good idea to start the Christmas light-up early?