One of the first otters that appeared in central Singapore is missing and presumed dead, a community of otter watchers said on Thursday.

The alpha male, of a family of otters living at the Singapore River, began showing signs of illness last Thursday, said Mr Jeffery Teo, who is part of the Otter Working Group, which is made up of representatives from the public and government and other agencies involved in the welfare of otters.

The once robust otter, estimated to be seven years old, "got weaker and smaller; he was seen vomiting and struggled to swim and eat", said Mr Teo.

It would also sleep on a grass patch while the rest of the family swam in the river, he added.

Otter watchers have found blood in the otter's spraint, or dung, in the past week.

On Wednesday, the otter was last sighted alive by the group at Jiak Kim Bridge, near Robertson Quay. The animal was trying to eat but was too weak. It rested as it watched the other otters hunting. 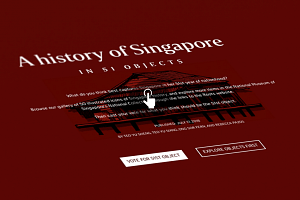 A history of Singapore in 51 objects

The Otter Working Group was informed of its condition and an operation involving Wildlife Reserves Singapore and the Animal Concerns Research and Education Society (Acres) was planned for this week. They were closely monitoring the otter and planning how to isolate it , but it was too late.

The otter has been missing for more than 36 hours as of yesterday morning. It had not been seen away from his family before this.

OtterWatch, a Facebook page dedicated to Singapore's otters, posted a photo of it on Thursday afternoon, with the words: "In Memory of 1st Otter in our City. Marina Dad, 2010 - July 2017."

Some people suspected that the otter might have accidentally eaten rat poison.

"Recently, Marina dad is looking very tired. Fresh blood has been observed from his poo these 2 days. We are concerned if he has been poisoned," otter watcher Nick Soo posted on Facebook on Tuesday.

A resident in the area had also posted on the Nature Society's Facebook page that her dog was poisoned at the river.

She claimed a pest control company had left rodent poison in the ground cover and bushes along the river, which is a busy walking area with a lot of dogs, kids and otters.

The otter, affectionately known as Ah Huat to otter watchers at Gardens by the Bay, first appeared there in 2013 with its mate, which gave birth to five pups in 2014.

They had two more litters since, and moved to the Singapore River last year after losing their territory to another family of otters from Bishan.