In the past five years, 5 to 8 per cent of residents in welfare homes for the destitute left the homes without permission, or did not return as scheduled.

The majority have since returned, said a spokesman for the Ministry of Social and Family Development (MSF), which released the figures to The Straits Times.

It was reported last month that Mr Poh Hwe Chee, 70, drowned at Changi beach on Nov 9 last year after absconding from Tembusu Home. The day before, he had been accompanied by a nursing officer to a polyclinic, where he disappeared.

The drowning was found last month to be a case of suicide. State Coroner Marvin Bay said Mr Poh was left to fend for himself after his stepdaughter sold his flat in late 2014. He was then admitted to Tembusu Home, where he rarely interacted with anyone.

After his death, in March, the MSF tightened its rules, telling homes to make a police report as soon as a resident left without permission. Previously, a report could be lodged only after a person had been absent for over 24 hours.

Residents who left the homes without permission did so for various reasons, said the MSF. Some went to work or were on home leave - during which they stay with their families for a few days - but returned later than the time specified. Others left during medical appointments or outings, to drink alcohol or smoke, which are banned in some homes. 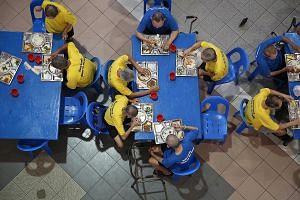 Admission to a welfare home for the destitute is a "last resort", and homes have measures in place to help newly admitted residents adjust to staying there, said the MSF.

Under the Destitute Persons Act, a person may be required by MSF's director of social welfare to stay in a home if he is found to have no place to stay or no means to support himself. A person can also voluntarily seek to be admitted. About half the residents in such homes did so, and this may be done after social workers refer them to the MSF.

Before a resident is admitted, the ministry works with a social service agency to assess the person's circumstances that led to him being destitute. They also contact the person's family to explore the feasibility of placing him in the family's care.

To help residents adjust to staying in the homes, during the first few months of their stay, they receive psychological and social support, and counselling from social workers. Homes also have a "buddy system" to help new residents settle in.

The Bukit Batok Home for the Aged has these measures in place. Its superintendent Tu Kiang Leong said: "Some residents can't stand staying in an institution. We have structured, daily routines to shape residents' behaviour, and not many can adapt initially. So, the first month of a resident's stay is a crucial period, and our social workers have to work very closely with them."

A version of this article appeared in the print edition of The Straits Times on June 12, 2017, with the headline 'Majority of those who left homes without permission have returned'. Subscribe
Topics:
More
Whatsapp Linkedin FB Messenger Telegram Reddit WeChat Pinterest Print Purchase Article Copy permalink