The Land Transport Authority is developing a video analytics system that can discern abnormal patterns, such as commuters falling onto train tracks.

Mr Chia Chun Wah, SMRT senior vice-president of the Circle Line and Bukit Panjang LRT Special Projects, revealed details of the system that is in the trial phase, as he testified in a court inquiry yesterday into the death of cook Ang Boon Tong, 43.

The court heard that Mr Ang was drunk after consuming about four bottles of beer when he fell off the platform at Fajar LRT station on the Bukit Panjang Line operated by SMRT and onto the tracks on March 24 at around 12.40am.

State Coroner Marvin Bay said no one saw the victim before he was struck by two driverless trains and died of multiple injuries. He added that the station did not have any detection measures apart from manually monitoring closed-circuit television (CCTV) footage. 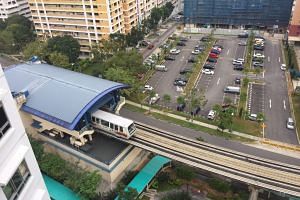 Assistant Superintendent Lim Jim Kai, the investigation officer, said a CCTV camera had captured Mr Ang for two seconds falling 1.22m off the platform. But the train service controller tasked with monitoring CCTV footage from an operations control centre had missed Mr Ang's fall as she was overseeing the station's closing.

The coroner, who said the death was a tragic misadventure, noted that Mr Ang lay on the tracks for three minutes before he sat up and rolled to his left.

He was struck by a train arriving at 12.48am and by another that arrived 10 minutes later before he was spotted lying on the track.

The police were notified at around 1am and a paramedic pronounced him dead at 2.20am.

At around 10.30pm the night before, Mr Ang, a Malaysian, had gone to the Koufu foodcourt below Fajar LRT station - where his wife worked - and drank there with his friends. His wife headed home first and Mr Ang left two hours later, walking to the LRT station alone.

CCTV footage played in court yesterday showed him losing balance and falling onto the tracks near the rear of a train that had pulled away.

MRT stations have sliding doors on the platforms that will open for passengers to board and exit the trains. However, the LRT station did not have such features.

He added that commuters could activate the emergency train stop buttons at the platforms when there is an emergency, which would cut power to the trains.

Mr Chia said the safest course for someone falling off the platform is to stay on a guideway in the centre of two tracks, which is usually marked by yellow lines. Another option is to head to the end of the platform where there are stairs leading back into the station.

Coroner Bay said the video analytics system is "expected to generate an alarm that will give train operators a cue of a possible emergent situation, and allow their speedy investigation to resolve the emergency".

He added: "It would also be useful to raise public awareness of the existing measures available such as the emergency stop plunger, the safety zone and the staircase access back to the platform to avert disaster whenever a person falls onto the track."

Speaking to reporters, Mr Ang's wife, Madam Lee Yoon Cheng, 40, who attended yesterday's inquiry, said they have three children who are between nine and 17 years old.

"I'm on my own now and I have to support them by myself."