The "Better Journeys" series explores how our daily commutes can be made better, with a focus on ride-hailing. This sixth and final instalment takes readers behind-the-scenes to Grab's Lost and Found centre.

In a small room labelled ‘Lost & Found’ in Midview City, three employees from Grab’s partner experience team are busy organising the paperwork that accompanies the 700 to 800 items left behind in the ride-hailing operator’s cars every month.

At 2.15pm, a well-built man in office attire walks in. The 42-year-old salesman has come to pick up his misplaced house keys. In less than 10 minutes, he is reunited with them.

Grab deals with many lost-and-found cases every day, and some are quite peculiar.

The day before our visit, a driver brought in a lonesome banana, after his passenger insisted the item be returned.

“We tag every item that comes in, no matter how big or small,” says Rachel Tay, one of Grab’s partner experience team leads. Her team of 10 takes turns running the lost-and-found service, which involves engaging with Grab driver-partners, passengers, the Singapore Police Force and various organisations.

Items are catalogued by date received. Valuables or personal items not claimed within 30 days are taken to a police station. Non-valuables are donated to charity. Perishables – like the banana, which ended up being unclaimed – are discarded.

Only 30 per cent of items find their rightful owners.

A Grab spokesman says: “We understand how distressing it can be when a passenger loses an item. We set up the lost-and-found service to help connect missing items to their rightful owners, and to minimise our driver-partners’ inconvenience. Passengers who have lost items can contact their drivers through the app within four hours of their trip.”

Ms Tay says: “I feel heartache for those who lose stuff. I would be concerned when people don’t come to collect their items. I mean, do you not need these things?”

To reiterate her point, she picks out a few notable items from the current inventory: an Audemars Piguet Royal Oak Selfwinding Blue Dial watch, retailing for $30,806 (new) on website Chrono24, and a passport from the People’s Republic of China.

Two plastic trays containing a month’s worth of lost mobile phones perch on the shelf behind.

One wonders if these misplaced items are a sign of a rapidly ageing, forgetful society.

Or are Singaporeans just a distracted lot?

Catherine Loveday, a neuropsychologist at the University of Westminster, writes in The Conversation: “By and large, where our memory fails us, it is because we are tired, not paying attention, or trying to do too much at once.”

There are seasonal trends: During Hari Raya, there was a spike in songkoks found. Christmas saw presents and Christmas trees undelivered. During our visit, we spied hongbao (both empty and with money), Chinese New Year cookies, a box of bird’s nest and a pack of bak kwa.

Grab driver-partners can choose to leave the items at the Lost and Found centre, or deliver them personally to the passenger’s home. Either way takes extra effort, fuel and time, for which a reward is not guaranteed.

A 31-year-old driver, who wanted to be known as Mr Nave, walked in with a big bag of “very smelly shoes” that had been left in his car boot. He was not sure whom it belonged to.

It's a hassle for me to return these items. Honestly speaking, I would appreciate some compensation, or at least a 'thank you'.
MR NAVE, grab driver-partner

It was not the first time he was returning shoes. Other items he has found are a mobile phone, bank security token and keys.

“It’s a hassle for me to return (these items). Honestly speaking, I would appreciate some compensation, or at least a ‘thank you’,” he says.

Driver Goh Kok Meng, 60, worries that passengers may not know how to contact him if they lose an item. So far, he has found a wallet, a graduation certificate, and a mobile phone in his car.

“It’s troublesome to return these things – it’s not my problem actually. But this is part of being in the service line.” 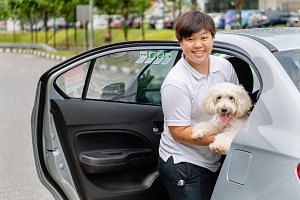 Pets, now boarding: With GrabPet, Fido can now go for more than a walk

Grab’s customer experience team handles an average of 10,000 queries daily. Top topics vary from time to time, but consistently include lost and found items, as well as enquiries and clarifications of fares (surges, surcharges, ERP charges).

To reduce the number of lost-and-found incidents, Grab driver-partners and riders are encouraged to survey the seats after a trip, to ensure that nothing is left behind.

Yet a driver’s honesty and kindness should not be taken for granted. “We encourage passengers who arrange to meet with our driver-partners at a mutually agreed time and place to give the driver-partners a token for their effort. This is to compensate for their costs and time,” says a Grab spokesman.

Having lost his handphone before, Mr Goh adds: “If I lose an item and someone returns it, I would be very happy. I know the feeling of losing something important.”

Grab announced the launch of three new safety features on March 8, in conjunction with International Women’s Day. Powered by artificial intelligence and machine learning, the features will be rolled out in stages within the year.

Says a Grab spokesman: “When Grab was founded in 2012, it was for a simple mission to make commuting safer. We have never deviated from this mission and are the only major player to-date making investments in foundations like a 24/7 customer support centre, number masking and driver-partner verification. Our aim is bringing to zero the number of incidents that are completely preventable, and as far as possible, reduce the number of road accidents.”

The improved technology can detect if vehicles make unauthorised stops or are involved in an accident. If an unusual pattern is detected, Grab will work with emergency services to intervene as early as possible to prevent potential incidents.

2. Safer and smarter allocation to reduce the risk of incidents

Where possible, female drivers will receive booking allocations only from female passengers. Feedback on drivers or riders who are flagged out on safety issues will be monitored in real-time to provide the safest possible match between driver-partners and passengers.

Driver-partners are currently required to take a selfie each time they start up the Grab app, to verify their identity before they can be assigned jobs. This verification process has now been extended to new passengers of the platform, and those who have not booked a ride for an extended period of time.

Responding to the update on booking allocations for female drivers, Suhanthi Thangarajoo, a part-time Grab driver-partner, says: “As a female driver, I definitely welcome this move. I hope that it will also encourage more ladies to consider Grab as a source of income for themselves with this change.”

Adds Grab: “Creating a safer everyday for every user is a mission we will always keep close to our hearts. Grab is committed to doing more and will continue to develop and roll out new initiatives and features as we work to bring preventable incidents on our platform to zero.”