A team of researchers is one step closer to developing a remedy for a severe form of non-alcoholic fatty liver disease that is currently untreatable.

The researchers have found that deactivating a protein called interleukin 11 (IL-11) with human antibodies reverses inflammation and scarring of the liver in patients suffering from non-alcoholic steatohepatitis, the leading reason for liver transplant worldwide.

This stage of the disease is marked by liver inflammation and scar tissue caused by a buildup of fat in the liver, and can lead to liver failure and cancer.

One in three people here has non-alcoholic fatty liver disease, even if they are not obese.

The team found that the IL-11 protein - contrary to previous research - causes fibrosis and organ damage. It triggers the development of non-alcoholic steatohepatitis and fat accumulates in the liver of patients.

The protein is most common in people who are obese and diabetic, and causes fatigue, abdominal pain, itchy skin and nausea. 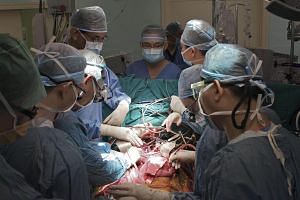 The skinny on fatty liver disease

Antibodies developed by the researchers inhibited the protein in mice, which were placed on a high-fat, high-sugar diet for six months.

After the mice were put on the antibodies for eight weeks, the liver damage, inflammation and fibrosis were reversed by half, and they also had lower blood levels of cholesterol and glucose, said Dr Anissa Widjaja, a senior research fellow at Duke-NUS' Cardiovascular and Metabolic Disorders (CVMD) Programme and first author of the study.

The findings were published in the Gastroenterology journal this month.

There have been multiple recent failures of drugs in clinical trials, said Professor Stuart Cook, director of the CVMD Programme.

Most drugs target one aspect of non-alcoholic steatohepatitis - such as inflammation, scarring or fat. But the antibodies reverse all three.

"The problem with some therapies is that when you treat one aspect, you make other things worse. For instance, you might treat the fat in the liver, but end up with more fat in the blood," said Prof Cook, who is also Tanoto Foundation Professor of Cardiovascular Medicine.

The researchers also believe that the antibodies can repair scarring caused by fibrosis in other parts of the body.

Enleofen Bio, one of whose founders is Prof Cook, is developing the drug and aims to have it ready for clinical trials by the end of next year.