17 species of invertebrates found in northern coast, and researchers expect to find more

Coral reefs hugging Singapore's southern coast are home to a great diversity of marine life, but they are not the only undersea palaces here.

Seventeen species of invertebrates (animals without backbones) new to science have been discovered in Singapore's northern shores - and researchers are expecting to find more.

"Singapore is one of the busiest ports in the world, yet we are still able to find new species, and a diversity of new species, in our waters," said Dr Lena Chan, director of the National Parks Board (NParks) National Biodiversity Centre.

While identifying specimens that are new to science or new records for Singapore is encouraging, it is only the first step in understanding more about our marine habitats.

"The great species diversity can be attributed to the varied ecosystems existing in Singapore, which are inter-linked, since some animals inhabit different ecosystems at their various life stages."

The new finds include a sea cucumber less than 2cm long, a 4cm polychaete (worm), and a 2mm gastropod (snail).

The discoveries are part of Singapore's first Comprehensive Marine Biodiversity Survey led by NParks. It roped in researchers from the National University of Singapore's (NUS) Tropical Marine Science Institute (TMSI) and the Lee Kong Chian Natural History Museum and aimed, for the first time, to get a clear picture of sea life here.

As part of the survey, NParks and NUS organised a three-week workshop on Pulau Ubin in late 2012 to study the marine life of the Johor Strait. There, the shores are characterised by mangroves, mudflats and sandy shores, largely due to sheltered conditions and the influx of sediment-laden freshwater from rivers into the Johor Strait. Thirty-one sites were surveyed, and some 12,000 specimens were collected. These are being kept at TMSI and the Lee Kong Chian Natural History Museum and many are still being processed.

"Because meiofauna have high turnover rates, they may act as good sentinels of environmental change, and we are keen to pursue this further," he said.

Unlike the more open waters of the Singapore Strait in the south, the marine environment up north is comparatively sheltered. The 50km-long Johor Strait separates Singapore from Malaysia, and is only 2km wide at its broadest. Down south, Singapore is separated from Batam by 15km of water, and experiences significant water exchanges.

Another difference between the two marine environments is salinity. The Johor Strait receives freshwater from rivers in Johor, whereas the Singapore Strait is saltier.

For example, while coral reefs thrive in southern waters, they do not seem to do as well in the north due to the fluctuating salinities and heavier sedimentation there. Corals need sunlight to thrive but sediment suspended in the water column blocks the light.

The sedimentation has also led to deposits on Singapore's coast, forming the mudflats and sandflats characteristic of the northern shores.

Researchers found many different types of polychaetes in the mudflats, and a variety of gastropods and molluscs in mangroves, said Ms Linda Goh, NParks' deputy director of the biodiversity information and policy division at the National Biodiversity Centre. 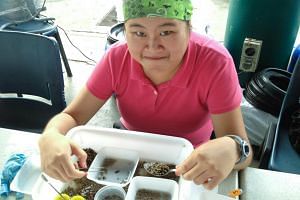 "The mudflats and mangroves are important habitats for birds, which feed on these organisms," she said.

But species recognition is only the first step in understanding more about our marine habitats, Dr Tan added. Delving into the ecology, diet, reproduction, interactions with other species, larval dispersal and settlement is the next step, he explained.

"Despite being small and constantly disturbed by coastal development, Singapore still has numerous small pockets of different marine habitats that are used by different species," he said. "It is important that we recognise and define these habitats in detail, so we can manage and conserve them properly."

Survey of the Johor Strait