"I'm still scared of that place. I won't go back again," declares the 38-year-old in Mandarin, shuddering involuntarily.

On Dec 8, as rioters hurled concrete slabs and glass bottles at her, she took refuge in the bus. But two of them managed to climb through a broken window and assaulted her with a stick.

The attacks left the mother of one with cuts and bruises on her face and limbs, and a minor fracture to her right hand. A cut above her left eye required six stitches.

During the Committee of Inquiry hearing in February, others alleged that Madam Wong had used vulgarities and derogatory terms such as "stupid" and "idiot" with the workers, and even pushed them.

But she flatly denied this in court, saying she went only as far as raising her voice at times.

Speaking to Insight at her Potong Pasir flat this week, Madam Wong is chatty. 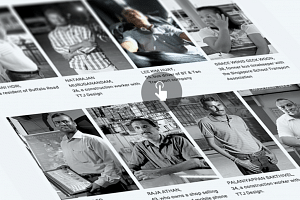 Little India Riot: One Year Later - Have we moved on?

The permanent resident from Malaysia breaks into a smile when Insight notes that the scar on her left brow is barely noticeable.

"I used this ointment recommended to me by Mr Sitoh Yih Pin. It's really effective," she says, referring to the MP for Potong Pasir.

She has since left her timekeeping job, and sells children's clothes at flea markets, as well as taking care of her five-year-old daughter.

"She cried when she first saw me injured. But now she knows what happened," says Madam Wong, who had nightmares for a week after the riot.

While the future may seem uncertain, one thing is for sure - she will not be resuming her position as a bus timekeeper.

"My husband won't allow me to go back. And I don't want to, either. It's too dangerous," she says. "I just want to put this all behind me."