SINGAPORE - A recall here of rockmelons imported from a farm in Australia linked to a deadly listeria outbreak has been completed.

Singapore's Agri-Food and Veterinary Authority (AVA) said in a statement on Monday (March 5) that the affected rockmelons were sold at Sheng Siong outlets and wet markets between Feb 12 and March 2.

But a fourth person has now been confirmed to have died in Australia after eating rockmelons tainted with the listeria bacteria.

The victim is believed to have died over a week ago, ABC reported on Wednesday. But the cause of the person's death could be confirmed only on Tuesday.

There are now 17 confirmed cases of listeriosis linked to the affected melons in Australia.

Here's what you need to know about listeria.

It is a type of bacteria that causes listeriosis, a rare but deadly bacterial infection. 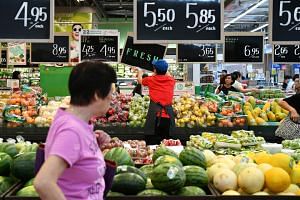 For most people, consuming food with the listeria bacteria does not cause illness. However, listeriosis can pose serious risks in those with weakened or compromised immune systems, such as newborns, pregnant women and the elderly.

What are the symptoms of listeriosis?

They include diarrhoea or other gastrointestinal symptoms, followed by flu-like symptoms such as fever and muscle aches.

People with weakened or compromised immune systems are at risk of serious brain or heart infections, which may lead to death.

For pregnant women, listeriosis can cause complications in the foetus or newborn. This can lead to miscarriage, stillbirth, premature delivery, or life-threatening infection of the newborn, according to the US Centers for Disease Control and Prevention.

Where can the bacteria be found?

It is found in the environment, such as in soil, water or faeces, and can contaminate food items, especially raw or ready-to-eat foods. This includes raw or unpasteurised milk, raw meat and seafood, and fresh fruits and vegetables. Food contaminated by listeria smell, taste and look normal, according to the World Health Organisation (WHO).

The bacteria takes between one and four weeks to incubate. Anyone with symptoms within 70 days of eating the affected Australian rock melon is advised to seek medical attention.

Which countries have experienced outbreaks?

There have been sporadic outbreaks of listeria infections worldwide. Recently, outbreaks have occurred in Australia and southern parts of Africa, but they are unlikely to be related, said Dr James Yew, a consultant at the department of infectious diseases at Tan Tock Seng Hospital.

The infection remains relatively rare and does not occur frequently anywhere.

How can listeria be detected and treated?

The bacteria can be detected in the blood or faeces of patients that show symptoms, said Dr Gail Cross, an associate consultant with the division of infectious diseases at the National University Hospital.

It can also be found in the cerebrospinal fluid of patients who have meningitis, one of the diseases that listeriosis can cause, she added.

If diagnosed early, listeriosis is treatable with antibiotics.

Young people with normal immune systems who have mild listeriosis can recover and often do so without specific treatment, said Dr Yew.

However, for newborns, the elderly, pregnant women and those who have weakened immune systems, the disease could result in permanent disability and even death.

How can listeriosis be prevented?

Food should be handled carefully before consumption. For example, rockmelons, which are typically eaten raw, should be thoroughly washed before being eaten.

I bought rockmelons during the affected period. What should I do?

Consumers who suspect that they bought the affected melons should not consume them, AVA advised. Those who do not feel well after eating them should seek medical attention.

Sheng Siong said on Tuesday that customers who purchased implicated melons from its outlets should dispose of the fruits immediately, or return them to any of the supermarket's outlets for a full refund. Each rockmelon costs between $6.99 and $7.99.

The supermarket chain said that it has replaced the melons with a new batch of smaller rockmelons from Western Australia, which has been confirmed to be safe for consumption. Refunds or exchanges will not be provided for these melons.

A recall of the affected rockmelons has been completed. All unsold imported melons have since been removed, and there has been no further imports of the fruit from the affected Australian grower since, said AVA.

The authority added that all rockmelons currently available for sale here are not implicated in the recall.