Prime Minister Lee Hsien Loong has cautioned India over withdrawing a tax exemption on capital gains, saying it could hurt the South Asian country and affect its attractiveness to investors from Singapore.

India is looking at removing the tax exemption given to Singapore after it withdrew a similar facility to Mauritius recently to prevent Indian firms from routing cash there to avoid paying taxes.

A 2006 tax treaty between India and Singapore had a provision that any changes in the Mauritius treaty would automatically apply to the one with Singapore.

In an interview with The Hindu newspaper, Mr Lee said Singapore was different from Mauritius and was careful to ensure there was no hot money or black money funnelled through it. India also had over $100 billion in a wide range of investments from Singapore over the last decade.

"We have actually built up a flow of bona fide good investments into India which is very substantial, and there is a whole community of professionals who are managing this out of Singapore," Mr Lee added in an interview with Singapore media.

"And I think it's important that, whatever India does, they don't shake that confidence which has been built up over these past 10 years and they don't cause unintended harm to themselves." 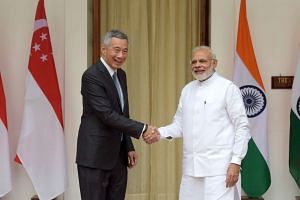 Many opportunities in India amid challenges: PM Lee 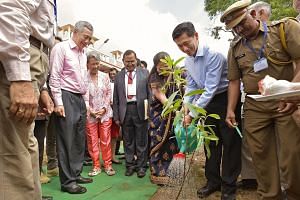 He added: "On that basis, PM (Narendra) Modi and I agreed that DPM Tharman and Mr Arun Jaitley will meet again and see how we can think out of the box and work out solutions which should be beneficial to both countries."

Singapore Deputy Prime Minister Tharman Shanmugaratnam and Indian Finance Minister Arun Jaitley have been tasked with discussing the issue further and to see how they can facilitate investment flows.

Said Mr Lee: "I explained to Mr Modi it is not a question of whether India is entitled to do this, which of course they are, but whether it is in India's interests to do it and, if so, what is the best way to do it without causing unintentional harm to India."

The move to tighten tax treaties is part of a campaign by PM Modi to crack down on black money, or funds that are never reported to the authorities.

His government recently withdrew capital gains tax exemption to Cyprus, and has been looking at ways to bring back billions of dollars sent abroad by rich Indians to avoid taxes.

Under the agreement re-negotiated with Mauritius, capital gains tax will be imposed for companies already based in Mauritius from next year.

There is hesitation on the Indian side to make exceptions for any country, and a senior Indian official noted the tax treaty with Singapore is a "work in progress" but declined to comment further. Analysts say investors are concerned about the uncertainty.

"It is going to be a tough negotiation," said Mr Rishi Sahai, managing director of investment bank Cogence Advisors.