MPs, political watchers say it will allow allegations of abuse of power to be addressed publicly

Members of Parliament and political observers yesterday said they supported the move by Prime Minister Lee Hsien Loong to make a statement in Parliament about a dispute with his siblings over their late father's house.

Putting the issue under scrutiny in the House will allow the Government to address in public the serious allegations about abuse of power that have been made by Dr Lee Wei Ling and Mr Lee Hsien Yang, the younger children of the late founding prime minister Lee Kuan Yew.

PM Lee, in a statement yesterday, urged MPs from both sides of the House to examine the issues thoroughly and to question him and his Cabinet colleagues vigorously.

Parliament has been the setting where contentious issues had been given an airing in the past, like in 1996, when the late Mr Lee and PM Lee, who was then deputy prime minister, were accused of receiving discounts for properties they bought from Hotel Properties Limited.

The late Mr Lee, who was senior minister then, gave a public account of what he described as open and above-board transactions during the four-hour debate.

Finance Minister Heng Swee Keat, in a Facebook post, said: "Like PM, I hope this will be the chance for all of us to discuss things openly and thoroughly, dispel doubts, and strengthen confidence in our institutions and system of government." 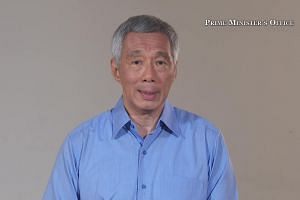 PM Lee apologises for harm caused by dispute with siblings, will deliver ministerial statement in Parliament on July 3

Meanwhile, MPs contacted said it would be a chance to clear the air.

Nominated MP Kok Heng Leun said: "The debate is important for accountability... There is so much reported in the news. Singaporeans do want to know what is going on."

He cited specifically the issue of the future of 38, Oxley Road, the house where the late Mr Lee lived for most of his adult life.

"The key questions are: What was Mr Lee Kuan Yew's wish? What is the Government looking into with regard to the house?" he said.

Chua Chu Kang GRC MP Zaqy Mohamad said the move to lift the Whip shows that "PM Lee is not afraid to put the matter under the microscope".

He added that the debate in Parliament will be welcomed by Singaporeans because the serious allegations made have created a buzz in Singapore and overseas.

"The accusations go to the heart of the integrity of the Government as well as PM as the leader of the Government," he said. "Having it properly scrutinised in Parliament will hopefully put the matter to rest and assure people that whatever actions taken so far are above board, so that the Government can continue to focus on the pressing issues it has to handle."

Non-Constituency MP Daniel Goh from the Workers' Party, noting PM's call for all MPs to scrutinise the issue, said: "We have already been doing that and will continue to do so, in order to raise questions in Parliament on July 3."

Others, such as Tampines GRC MP Desmond Choo, said they would canvass views from grassroots leaders and residents so that they can reflect them in Parliament.

Political observers interviewed said it was important to thrash out the issue in Parliament as the family feud has been taken public.

"It would help to clear the air and set the record straight. It would also help in regaining the complete trust and fullest confidence of the people of Singapore," said Dr Mustafa Izzuddin, a research fellow at the ISEAS - Yusof Ishak Institute.

He also said PM Lee's decision to apologise was "honourable".

Dr Norshahril Saat, another research fellow at the ISEAS - Yusof Ishak Institute, said he hoped MPs would speak their minds when Parliament sits because they are no longer bound by party lines.

"Citizens should also encourage their MPs - PAP or non-PAP - to speak on their behalf and raise tough questions," he said.

He added that many Singaporeans would feel assured knowing that PM Lee has said the issue would not affect important government business and pressing economic and security concerns.

He added, though, that even a parliamentary debate "might not see an end to the matter".

He said: "It is entirely possible that we have seen only a small portion of the private correspondence that could be disclosed. I would not be surprised if, during the parliamentary debate, more correspondence is disclosed online."