It is about their futures during their lifetimes, he tells world leaders at UN General Assembly

Prime Minister Lee Hsien Loong has called on world leaders to act on climate change, saying that they owe young people a responsibility to do so.

It is an issue the young are seized with, "and rightfully so, because it is about their futures during their lifetimes", he said in a speech yesterday at the United Nations General Assembly in New York.

PM Lee was among several leaders, including French President Emmanuel Macron and Kenyan President Uhuru Kenyatta, who have highlighted the issue this week as leaders from 193 countries gathered here to discuss important global challenges.

It was PM Lee's first address at the UN General Assembly since becoming prime minister in 2004.

And in presenting Singapore's national statement to the UN, he also dwelt on multilateralism and championing the rules-based international system, which he said was essential for dealing with "wicked" problems, such as climate change and eradicating poverty.

These problems cannot be solved by a single country alone, he said, calling on the UN members to support the multilateral approach and "push harder against the tide" of isolationist and protectionist sentiments.

"A rules-based multilateral system is still far preferable to any other way to secure peace and prosperity, and to solve global problems," he said.

One such challenge is climate change. PM Lee acknowledged the hundreds of thousands of young people who demonstrated peacefully all over the world last week, including in Singapore at Hong Lim Park, to demand action from governments to slow the warming of the earth and the rising of the seas.

A PLACE FOR FUTURE GENERATIONS

It is the responsibility of our generation to leave future generations with a habitable planet, both through mitigation and adaptation.

"We owe them a responsibility to act, and they deserve our full support," he said. "It is the respon-sibility of our generation to leave future generations with a habitable planet, both through mitigation and adaptation."

In Singapore, where climate change is an existential issue, significant measures have been rolled out to reduce emissions, he noted. 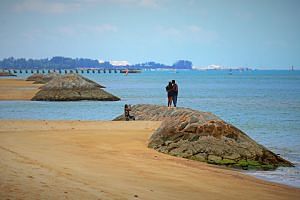 Funding for $100b climate change measures to come from sources including borrowing, ministry budgets

PM Lee had outlined them on Monday at the UN Climate Action Summit. These range from a carbon tax, the first in South-east Asia, to working with the UN to offer technical assistance to other countries.

Singapore will also collaborate with partners to better understand climate change and its impact through research and institutions such as the Asean Specialised Meteorological Centre. The centre, set up in 1993, is headquartered in Singapore.

Using a variety of data sources including satellite imagery and computer models, it supports national meteorological centres in the region in predicting weather and the climate as well as to monitor and assess land and forest fires, plus the occurrence of transboundary smoke haze for South-east Asia.

But most importantly, he said, "we have to inculcate in our popu-lations the mindset that each one of us has a responsibility to live sustainably and in harmony with the environment".

While Singapore will do its part to limit global warming to 1.5 deg C above pre-industrial levels, the key threshold for avoiding catastrophic climate change, it is under no illusion that the target will be easy to achieve, he added.

"Even if we do make it, the problem will not be completely solved, because that will only slow down the rise in sea levels, but will not stop it. But we must try our best, and over time, all countries will have to do more to mitigate climate change," PM Lee said.

A version of this article appeared in the print edition of The Straits Times on September 28, 2019, with the headline 'Leaders have a duty to youth to act on climate change: PM Lee'. Subscribe
Topics:
More
Whatsapp Linkedin FB Messenger Telegram Reddit WeChat Pinterest Print Purchase Article Copy permalink