The shattering of a glass door at the new National Gallery could have been avoided had it been made using laminated tempered glass, according to local suppliers.

Tuesday's accident at the newly opened National Gallery Singapore left one man with minor abrasions on his right hand.

Investigations are under way to determine the cause of the incident.

When The Straits Times visited yesterday, the glass had been cleared though the door had been boarded up and barricades had been placed to cordon off the area.

A spokesman for the gallery said that the damage was still being assessed and there was no set date for the door to be repaired.

The gallery was unable to provide information on which company had installed the door.

The incident came after a man died in January this year after being cut by broken glass from a shower screen.

Mr Gary Lee, business development manager at Singapore Safety Glass, said there are many reasons why glass shatters, such as poor quality and design.

"The Building and Construction Authority has regulations but it's up to the building owners to choose the glass based on those regulations," he said.

The door which shattered at the National Gallery was of tempered but not laminated glass, according to Mr Ian Lee, the operations director at Meng Heng Glass.

Spontaneous breaking, he said, is an inherent characteristic of tempered glass due to the process of heating and cooling during its manufacture. 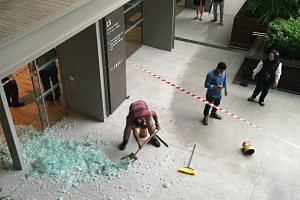 "Even accidentally knocking the glass can trigger it to shatter," he said, adding that this could occur days or even weeks down the road.

Both men agreed that the best type of glass to use is laminated tempered glass, which is safer than normal tempered glass due to its use of an interlayer that helps hold the glass together even when broken.

Laminated tempered glass is generally more expensive than tempered glass, which Mr Ian Lee says limits its appeal to customers: "People want glass that is high quality and cheap, but you can't get the best of both worlds."