SINGAPORE - The labour movement has called for the removal of the salary cap under the Employment Act; this will pave the way for higher earners to be better protected from unfair dismissals.

National Trades Union Congress (NTUC) assistant secretary-general Patrick Tay made the case in a blog post on Friday (Jan 19), citing rising wages and professionals, managers and executives (PMEs) making up a growing proportion of the workforce.

PMEs earning more than $4,500 a month are not covered under the Employment Act, which provides workers here with basic rights such as paid sick leave and redress for unfair dismissals. To resolve disputes with employers, those not covered have to rely on voluntary mediation or civil suits.

The median gross monthly salary for resident professionals, managers, executives and technicians was about $5,910 as at June 2016, Mr Tay noted.

He said he has received feedback on this issue from aggrieved PMEs seeking help at NTUC's U PME Centre, legal clinics, at his Meet-the-People sessions, as well as through his social media platforms.

"While the intent of the cap is to strike a balance between the rights of employees and to allow companies to manage their labour obligations and costs, the changing profile of our workforce requires a regular review... to ensure that these policy tensions are adequately balanced," he wrote.

The Manpower Ministry announced on Thursday that it is reviewing parts of the Act - including whether the cap should be removed - and asked the public to provide feedback. 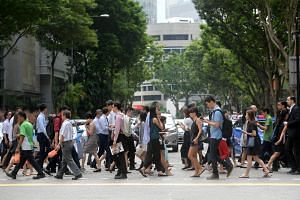 Other changes the labour movement would like to see include raising the salary limits for Part IV of the Act, which provides additional protection to specific groups of workers: rank-and-file employees in white-collar jobs - such as clerks, receptionists and retail sales assistants - making up to $2,500 a month, and manual workers who earn up to $4,500 a month.

Mr Tay said the limits should be raised to keep pace with rising median wages, and suggested considering whether the scope of this section of the Act should be extended to PMEs, "as the dichotomy between 'rank and file' and 'PME' workers becomes increasingly blurred".

But he accepts that this requires a closer look as it will have a significant impact on both workers and employers.