Announcements on various platforms could have been made faster and clearer, say some

The Land Transport Authority (LTA) said that it made a series of public safety announcements on media platforms as well as in the Kallang-Paya Lebar Expressway (KPE) tunnel shortly after a taxi caught fire there on Tuesday evening.

The burning Trans-Cab caused a massive jam and triggered an evacuation in the KPE, with motorists advised to leave their vehicles and exit the tunnel on foot.

However, those caught up in the drama say the different announcements made on various platforms were confusing and could have been given faster.

LTA tweeted at 7.20pm to advise motorists to avoid the fourth lane due to an accident on the KPE. But in the tunnel, the message was slightly different.

Motorists at the scene also said all the lane-use signs were lit up with red crosses. According to the OneMotoring website, this indicates cars should not proceed.

While ST understands that on-site and radio announcements are targeted at motorists and passengers who would be directly affected by the situation, road users suggested that the alerts given on all platforms could have been more synchronised so as to avoid confusion. 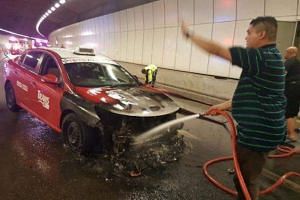 Our first thought was the safety of road users, say 2 men who helped put out KPE taxi fire

The mixed messages led to people reacting differently inside the tunnel.

Mr Jeff Leow, 24, a sales agent for Grab, was a passenger in his friend's car when the incident happened. He said that although all the red crosses were lit, his friend drove out of the tunnel. "My friend and I saw other drivers walking, but we didn't want to abandon the car. We drove out and were completely fine," he said.

Consultant Marc Ha, 44, saw the burning taxi when he entered the tunnel at around 7pm but said that LTA started responding only at about 7.20pm via radio announcements and its Twitter page.

"LTA sent out a very innocuous tweet that provided no information about what was actually happening. The taxi was burning, it could have exploded and motorists going past could have been badly injured," he said.

Ms Lili Pan, 24, director of Fire Safety SG, a fire protection company, said that drivers are encouraged to evacuate the premises on foot if smoke from fire causes poor visibility, or if there is a high risk of an explosion.

Mr Darrel Tan, head of business development at Falconfire.com.sg, which supplies fire protection products, said that whether evacuations should be done on foot or by car would depend on the situation. He said even walking out could be dangerous as the smoke could be toxic, especially in an enclosed tunnel with limited ventilation.

An LTA spokesman said the KPE Control Centre is equipped with equipment to deal with any accident or emergency. Such equipment include linear heat detectors that alert the operator at the control centre to an incident, or variable message signs to alert motorists to a fire.

What to do in a tunnel in case of a fire