He apologised for the "pain and turmoil" members of his church had to endure over the past few years, and bowed three more times in different directions as the congregation stood up and applauded for a good length of time.

Kong, 51, was speaking at the church's first service since he and five other church leaders were found guilty last week of misusing around $50 million of church monies to fund his wife's pop music career and to cover up the misdeeds. They will find out their sentences on Nov 20 at the earliest.

Yesterday evening's service at the sixth level of the convention centre began with songs of worship. About 40 minutes later, Kong took the stage. 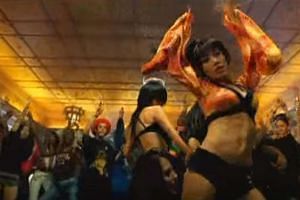 Idea was to spread Gospel via pop music

The others involved in the case - other than former CHC investment manager Chew Eng Han - were sitting in the front rows.

Kong told the youthful crowd of churchgoers that the church's future was secure, "because of you and the new leadership that has been put in place". He added: "Out of the ashes, we will rise."

Executive pastor Aries Zulkarnain later went on stage and said that while he was saddened by the verdict, he respected Judge See Kee Oon's decision.

Excerpts of the judge's written grounds were flashed on screens and Mr Zulkarnain explained parts of them to the congregation.

He also described how the church would improve its governance as it moves forward with a new "CHC 2.0" vision.

This would involve selecting well-diversified board members, appointing a legal firm to advise the board, setting up an internal compliance team and also carrying out an annual audit using an outsourced firm.

As Mr Zulkarnain led the church in prayer, an image of former CHC finance manager Serina Wee, one of those found guilty, was shown on the big screen. She was sobbing.