The KK Women's and Children's Hospital (KKH) apologised yesterday for dispensing expired nose drops for a baby suffering from fever and flu.

KKH said it has taken various actions, including engaging an independent panel to review its system for dispensing medicine.

This is the second such reported incident since May, when KKH also apologised for dispensing a used nasal spray and a bottle of nose drops for a young girl.

In the current case, customer service officer Judy Teo, 32, posted on her Facebook page on Monday last week that her daughter, who is about two months old now, was issued nose drops in August with an April 2018 expiry date. She had not noticed it earlier.

The next day, the hospital said it was investigating her allegations.

Yesterday, it acknowledged the nose drops were past their stated expiry date.

Its chief operating officer Alson Goh told The Straits Times that this may have resulted in a "loss of effectiveness" of the drops. "We sincerely apologise for this," he said. 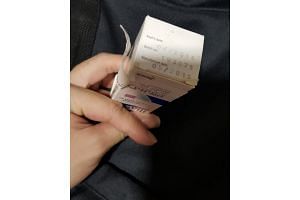 KKH investigating allegation that expired nasal spray was given to baby

KKH apologises for wrong medication that was 'mistakenly dispensed' to toddler

Visitor upset at host of extras in KKH bill

Mr Goh also said KKH has done a thorough check of all the medication in stock and reminded its staff to check expiry dates before issuing any medicine.

The independent review panel will "identify opportunities for further strengthening and improvement of our system in this regard", he added. "We have also clinically followed up with the patient. We remain in close contact with and are rendering the necessary support to the family."

In the May incident, KKH had said it was conducting investigations and reviewing its internal processes in the light of the incident.

Ms Teo said in her Facebook post that she had taken her daughter to KKH on Aug 25 for treatment of her fever and flu. After using the nose drops for a month, the girl still had a blocked nose and had trouble breathing properly.

This prompted her husband to check the nose drops, which was when the couple realised it had expired in April.