Most suffer weight issues, but some parents hope exercise will improve behaviour, posture

When 12-year-old Matthew Kum signed up for personal training at a gym last year, his main goal was to pass the National Physical Fitness Award (Napfa) test in school.

But since then, the Secondary 1 student has lost weight and is able to focus better in class.

"Before I started training, I was around 64kg and I would keep on getting teased in school," Matthew, who now weighs around 57kg, told The Straits Times. "Now, (my friends) just talk to me normally."

The handful of boutique gyms that take in young clients said parents are becoming more concerned about their children's sedentary lifestyle.

While many young clients sign up for help with weight issues, there are also those whose parents hope that structured exercise will improve behaviour or posture issues.

Mr Saravanan Nadarajan, director of boutique gym Ezfit, said: "Kids are using electronic devices more these days, and parents see the imbalance and are trying to correct it." 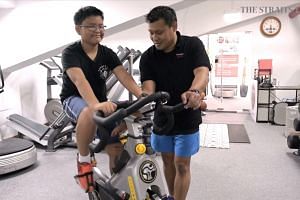 His gym sees around 15 children a month, ranging from age seven all the way up to those about to enter national service. Physique 360, where Matthew trains, has around eight young clients monthly.

Obesity rates in schoolchildren have gone up in recent years, from 10 per cent in 2000 to 12 per cent in 2014. A recent study by the Health Promotion Board found that if a child is overweight at age seven, he has a 70 per cent chance of growing up into an overweight or obese adult.

Personal training rates for children typically start at around $100 per session, which typically lasts 45 minutes to an hour.

The draw for many parents and children, said gym owners, is the privacy they offer, and customisation to the child's needs. For example, said gym director Ray Mcgregor, children may not be keen to take part in team sports because they feel they are not fit enough.

"Often, a lack of confidence around physical capabilities is the driving reason a child may be reluctant to participate in sports," said Mr Mcgregor, who runs a chain called Gym n Tonic. "So, addressing this really helps."

Even so, precautions must be taken when children are using gym equipment, said Mr Daryl Teo, who runs Physique 360.

"For example, you can't overload them with too much weight because they are still growing," said Mr Teo, who is Matthew's trainer. "Otherwise, you could stunt their growth."

Dr Rabind Charles, who has a personal trainer himself, signed up his son Jaden, 13, for classes at Ezfit because he had not been doing well in his Napfa tests. Jaden said that he finds these gym sessions more enjoyable than physical education classes. "It is a lot more fun and exciting, and there is a lot of focus on your strengths and weaknesses," he said.

Dr Charles said: "He will be going for national service in four or five years' time, and I didn't want him to struggle."

A version of this article appeared in the print edition of The Straits Times on July 06, 2017, with the headline 'Kids get fit - with help from personal trainers'. Subscribe
Topics:
More
Whatsapp Linkedin FB Messenger Telegram Reddit WeChat Pinterest Print Purchase Article Copy permalink