It was labelled as containing yohimbine, a potent medicinal ingredient that is not allowed in supplements sold here. It can lead to chest pain and blurred vision, among other adverse effects.

The man, who bought the product online, was discharged from hospital after a week.

But one woman was not so lucky. She died in 2012 after taking slimming pills she had bought through a foreign-based website. The 24-year-old died of dinitrophenol (DNP) poisoning. The banned substance is used in herbicides.

In the last five years, the Health Sciences Authority (HSA) has received five adverse drug reaction reports on the use of illegal weight-loss products.

Besides the man hospitalised for kidney failure, other victims suffered problems such as hallucinations and rapid heart rate. 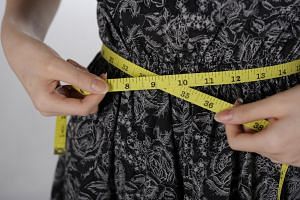 A spokesman for HSA said the small number of reported cases may not reflect the actual number of people affected by taking such pills. They may not know their adverse reaction is due to the product or may not tell their doctor about it.

Dr Lee Ee Lian, a psychiatrist at the Better Life Clinic, has seen patients with problems ranging from hallucinations to liver failure after taking slimming pills they bought online. They include a 24-year-old woman suffering from anorexia. At her lightest, she weighed only 34kg. She was afraid of putting on weight, especially after meals she did not prepare herself, and would starve herself.

Dr Lee said the patient also took five or six different types of slimming pills, bought from United States-based websites, and was hospitalised earlier this year for liver damage. She has stopped taking the pills and is now recovering.

"Don't buy pills online. They could be fake and you don't know what other kind of weird drugs they could be contaminated with," Dr Lee said.

"You could go nuts or even drop dead from a cardiac arrest."