It is no easy job to keep an eye on Singapore's coastline.

Add the 1,000 vessels that pass through the Singapore Strait on any one day, and the risk of an attack increases, said Singapore Maritime Crisis Centre's Colonel Kwan Hon Chuong.

The authorities are taking no chances, however, for the National Day Parade (NDP) at the Marina Bay floating platform.

As in previous years, a prohibited zone where no ships can enter will come into force on Thursday in the waters outside the Marina Barrage. The zone will be roughly 1km by 4km.

"The fact that we are so busy, so congested, and also very porous at sea means there are various security threats we are concerned with," Col Kwan, 39, director of the centre's national maritime operations group, said at a media briefing last Wednesday.

He said terrorism posed the main threat, citing examples such as the 2008 Mumbai attacks where terrorists hijacked a boat and entered the Indian city via the sea.

The maritime centre uses data analytics to build a profile of the ships that sail in Singapore's waters, so that it can detect suspicious behaviour.

Col Kwan said that on National Day, there will be twice as many patrolling ships in the seas around Singapore, increased shore patrols by the police and more stringent checks at the ferry terminals. 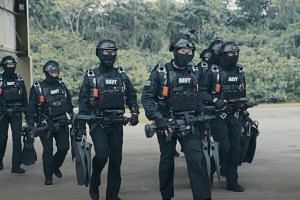 One ship that will be patrolling the seas that day is the RSS Fearless. Its marine systems operator, ME1 Sanjeevan Ganasegaran, said: "We're in between the ships at sea and the country."

The 24-year-old added: "We'll escort the ships to where they need to go, and then we'll carry on patrolling."

RSS Fearless' assistant operations officer, Captain Lester Wee, said this will be the second time that he spends National Day at sea.

Capt Wee, 27, who saw the NDP fireworks from the ship last year, said: "It's meaningful to see them, because it shows us that though we are out at sea patrolling while the rest of the population is enjoying a holiday, we are doing our part to protect Singapore."