SINGAPORE - What was supposed to be a leisurely holiday to Singapore for Australian Elliott Woolf did not get off to a good start.

First, he was separated from his wife Nicole, 30, who had to take a later flight due to an issue with her passport.

Then, his flight got delayed.

However, when he got to his hotel room at the Singapore Marriott Tang Plaza in Orchard Road, things took a turn for the better.

The 33-year-old owner of a window furnishings firm had sent an e-mail to the hotel, asking for a photo of Jurassic Park actor Jeff Goldblum to be placed in his room.

"I had received an e-mail from the hotel the week before we left, asking if we were interested in upgrading our room, or if we had any special requests," he said.

"I remembered seeing an article once where someone always asked for a photo of Ryan Gosling in their room when staying at a hotel, so for a laugh I thought I'd give it a go, without really expecting anything to come from it." 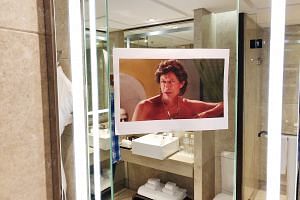 Mr Woolf, who also works in advertising, has been to Singapore on a few occasions before, mainly for business.

His five-night trip to the country earlier this month was his first time coming to Singapore with his wife for a holiday.

"It was so above and beyond what I'd requested that I couldn't believe it," he said. "(The collage) is now actually hanging up in my house. It wasn't even until I returned to the room later that night that I discovered other photos of Jeff scattered throughout the room. We left them up for our entire stay."

Mr Woolf, who is from Perth, had put up pictures of the photos on image-sharing site Imgur and Internet forum Reddit, that quickly went viral.

There was a photo of a smiling Goldblum in the hallway, another of him beaming above the TV, and one of him smouldering in the bathroom.

Towards the end of his trip, he fell sick, but praised the five-star hotel for giving him a late check-out so he could rest, and checking in frequently to see if he needed any assistance.

"At least while I was recovering in bed, I could look in pretty much any direction and see a Jeff Goldblum photo to cheer me up," he said.

Other cases of people requesting photos of celebrities in their hotel rooms have made headlines in previous years.

In 2016, a guest at The Huntley Hotel in Santa Monica, California, asked for framed photos of Goldblum to be displayed in his room.

In 2015, a guest at the Hotel Indigo: San Antonio-Riverwalk in Texas asked for a photo of Nicolas Cage in the film Con Air.

"I can't exactly claim credit for the idea but the hotel can definitely claim the prize for best response to the request," conceded Mr Woolf.

"I think next time I'll request photos of Christopher Walken."