The Straits Times Singaporean of the Year seeks to honour Singaporeans whose extraordinary acts of goodwill have improved their community and the lives of others. Today, ST announces the latest batch of finalists for the third edition of the award.

Muhammad Luqman Abdul Rahman is just 18, but has already made a difference in the lives of many.

Many strangers have had cause to call the teenager a lifesaver.

He has been performing cardiopulmonary resuscitation (CPR) on people in the vicinity who need help. He does so through the Singapore Civil Defence Force's MyResponder app, launched in 2015, which alerts users within 400m whenever someone suffers a heart attack and calls for an ambulance.

Luqman, who runs or cycles to the scene - be it from home or on his way to school - said he has saved about 20 lives so far.

In "almost all" of these cases, he performed chest compression before paramedics arrived.

Luqman started taking lessons in CPR at age 13 in a private training centre, after he saw his friends in uniformed groups were learning it.

"I thought I should give it a shot. It is a simple skill. All you need is the power of your two hands."

The very first time he performed CPR on a real person - a Chinese factory worker in his 20s - was when he located the man through the MyResponder app.

"I felt useful - I managed to play a part in giving him a second chance. I thought, I just did CPR on a real human, wow. All along I had just been training and training."

Before long, what was once "daunting" became something he could handle with a cool head.

Luqman, who volunteers with the Singapore Red Cross, has graduated from Temasek Junior College.

He hopes to study medicine at the National University of Singapore or Nanyang Technological University after national service. 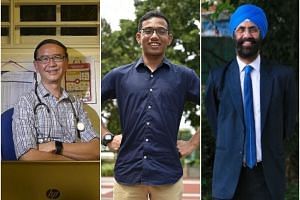 ST Singaporean of the Year: Latest batch of 3 nominees announced

He thinks the main mental barriers most people have towards CPR is that they fear injuring the other person. Also, they could be worried about running into legal trouble, for instance if the victim later accuses them of molestation.

But lose a life, and you can never get it back, Luqman said.

"Anyone in need of help would appreciate any help they can get."

Luqman believes that "what goes around comes around".

"One day, I hope to deliver CPR if my family members need it. If I am not around, I hope someone would (be there to) render assistance to them," he said.

Members of the public have been nominating Singaporean individuals or groups to be considered for The Straits Times Singaporean of the Year Award.

A judging panel has selected the 10 finalists. Public voting will begin on Dec 25 and end on Jan 14 at 6pm. Judges will use the results as reference when making their final decision.

To find out more about The Straits Times Singaporean of The Year award, go to http://str.sg/soty17

A version of this article appeared in the print edition of The Straits Times on December 18, 2017, with the headline 'Just a teenager, but he has already saved 20 lives'. Subscribe
Topics:
More
Whatsapp Linkedin FB Messenger Telegram Reddit WeChat Pinterest Print Purchase Article Copy permalink