The family of a premature infant, who was saved by an emergency caesarean section when her mother died after a road accident, has received an outpouring of concern.

Some have also offered to donate breast milk for the baby.

The infant's mother, Ms Goh Chieh Ting, 25, was six months pregnant when she was hit by a lorry last Saturday while crossing a road in Jurong West Avenue 1.

The accident happened at about 8am and Ms Goh was taken unconscious to Ng Teng Fong General Hospital, where she died of severe head injuries at 9.30am.

Her baby, Yu En, survived and is in stable condition at the National University Hospital.

The family considered appealing through online donation portal Giving.sg for funds and donations of milk for the baby.

Ms Goh's sister-in-law, Ms Nicole Yuen, had sent Giving.sg an e-mail at around 4am yesterday. She said: "Baby Yu En lost her mother just a day before Mother's Day."

She was writing on behalf of her brother Dave, who is Yu En's father.

In a response later that day, a spokesman for Giving.sg said it was "deeply saddened by the loss that Dave and his family have encountered". It is matching the family's needs to a charity to help the campaign.

The Straits Times understands that while Yu En is in hospital, she will not require donated breast milk from the public.

"The liver of a baby starts producing antibodies at least four months after birth. Before that, antibodies come from a mother's breast milk," said Dr Christopher Chong, an obstetrician, gynaecologist and urogynaecologist at Gleneagles Hospital.

"That is what formula milk does not have, and it is why we encourage breastfeeding. This can be achieved with donated breast milk as well," he said, adding that it is best to check if a baby is ready for milk before offering to donate.

"A baby born at six months will have to be slowly introduced to milk, as she will be unable to digest it initially. This process can take months," he added. 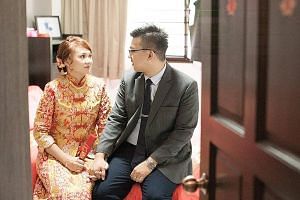 Dr Chua Mei Chien, head of KK Women's and Children's Hospital's neonatology department, said: "When a mother is unable or not available to provide her own breast milk for her premature baby, special infant formula for premature babies is used."

Meanwhile, the 46-year-old lorry driver involved in the accident told Chinese paper Shin Min Daily News that he hit Ms Goh while trying to avoid her mother-in-law, whom she was crossing the road with.

A version of this article appeared in the print edition of The Straits Times on May 16, 2017, with the headline 'Outpouring of support for family of premature baby'. Subscribe
Topics:
More
Whatsapp Linkedin FB Messenger Telegram Reddit WeChat Pinterest Print Purchase Article Copy permalink