Young professionals in law and accountancy are among those who have been hit the hardest by increasing demands on their time and performance, and stiffer competition in the industry.

These, coupled with the long and unpredictable hours, high workload and complex nature of the tasks, have led many to leave the profession after a few years.

Mr Lim ZK, is one such example. A year after joining a large local firm in 2015, he quit the firm - and the industry. As a junior lawyer, he would typically clock about 12 hours each day in the office, and then a few more at home.

The 28-year-old said: "There were always some periods that were very stressful, especially leading up to trial or a major hearing and, as junior associates, we were expected to be on the ball," said Mr Lim, who specialised in civil and commercial litigation before joining a Shanghai- based start-up to work in business development last year.

At this year's Mass Call - a proceeding to formally admit lawyers to the Bar - held on Aug 28, he cited a recent study in Britain that found that over 90 per cent of 200 young lawyers felt too much emotional or mental pressure at work.

Looking at the experiences of other jurisdictions, he urged local law firms to make it a priority to examine the safeguards that they have put in place.

There was always the pressure to stay around longer and look busy.

MS OLIVIA CHANG, 26, who chose not to renew her practising certificate. 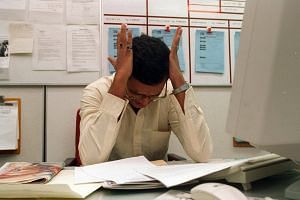 In his address, CJ Menon did not provide an attrition rate for lawyers.

But at last year's Mass Call, he cited statistics which showed that mid-tier lawyers - those with seven to 12 years of experience - made up less than 10 per cent of the profession in the last five years.

He said then that such "burnout" has led to a "hollowing out" of mid-career lawyers.

Figures by the Law Society of Singapore (LawSoc) show that, on average, about 8 per cent of lawyers do not renew their practising certificates.

These include those who are retiring and others who continue to work as lawyers in areas where a practising certificate is not required, such as in-house counsel, civil service or legal tech companies, said a LawSoc spokesman.

Ms Olivia Chang is among those who did not renew their certificates. She practised as a lawyer for three months after being called to the Bar in 2015 and then left for a brokerage firm.

The push came during a training stint, when she joined a small firm.

The 26-year-old said: "There was always the pressure to stay around longer and look busy."

She is now a senior claims advocate at Marsh Singapore, specialising in marine claims.

But it is not just the work itself.

The oversupply of lawyers in recent years has posed a challenge as well, noted Mr Yeo Chuan Tat, a dispute resolution lawyer who has been practising for 12 years.

"There is more competition for places in firms, for both training contracts and associateships, and this causes added pressure for young lawyers," said the director of Ascendant Legal.

Within the industry, he said, law firms are also now competing harder for work, as compared to a decade before, in part because of the increased presence of international players in the local legal scene.

"This means that one is expected to perform so as to obtain 'repeat business' from clients," he said.

Mr Lim said the experience was not all bad, when he was practising. But the hours got to him.

In the two weeks leading up to an appeal, he would work until about 2am daily, including on weekends.

He said: "There was a sense of achievement after the appeal against our client was dismissed. But would I do it again? Probably not."