Businesses and some home owners can now directly access solar energy from the national grid for the first time under a new programme by government agency JTC Corporation and energy retailer Sun Electric.

The model, dubbed SolarRoof, allows power to be harnessed from solar panels on the rooftops of JTC's buildings. It lets consumers buy this electricity even if the buildings they occupy are not equipped with solar panels.

Sun Electric sells the solar power to consumers in the open energy market. Existing solar leasing models usually channel excess power to the national grid only after the power has been used for common services or by home owners.

The official connection of JTC's first batch of SolarRoof properties to the national grid was done yesterday at a media event, where Sun Electric also unveiled an online dashboard that allows users to track their energy use.

This shows, for example, which specific rooftop their electricity comes from and the amount of carbon savings.

Mr Mark Koh, JTC group director of facilities and estate management, said of the programme: "It is a catalyst and drives a different model where solar energy can now be purchased from the grid by anyone, anywhere." More than 20 JTC buildings are expected to be connected over time to the national power grid by next year, producing up to 5 megawatt-peak of solar-generated electricity, which can power about 1,250 four-room HDB flats.

Dr Matthew Peloso, founder and chief executive of Sun Electric, said there are now 40 to 50 customers under the programme, which started testing in February 2016. 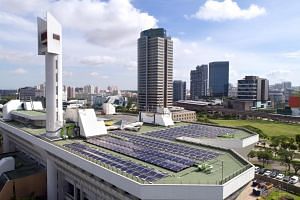 He added that the solar energy sold by his firm offers up to a 20 per cent discount on existing tariffs.

Customers include home owners in Jurong, where households can choose who they buy electricity from under the pilot launch of the open electricity market in April.

The partnership between JTC and Sun Electric started in 2015, when the solar energy company was chosen for an Open Innovation Call.

More than 95 per cent of Singapore's grid energy comes from the burning of natural gas. Though natural gas is considered the cleanest form of fossil fuel, its combustion still produces greenhouse gases.