When I tell my colleagues that I live in Pasir Ris, I often get looks of sympathy.

A one-way commute from the "far east" to our office in Toa Payoh takes nearly 1½ hours. Do the maths and that translates into more than 50 hours on public transport a month, most of which I spend on the MRT.

Like many others, I have spent many an hour in crowded carriages fiddling with my smartphone. As we alight, we become part of that weary, amorphous crowd shuffling its way to the nearest escalator.

At first glance, these public spaces - sanitised, mechanical - seem to offer little scope for the imagination.

We don't live on the fringes of danger: Fall asleep on the train and you don't have to worry about waking up in some seedy district.

And our journeys aren't tinged with the romance of long partings - the MRT isn't going to take you 500 miles from home.

Rather, an uneasy restlessness prevails. At peak hour, the train is a social vacuum packed with bodies whose minds are floating off somewhere else.

We disconnect ourselves from our immediate surroundings - anything to avoid that more-than-ample view of sweaty armpits and nose hairs. I start browsing the Web, and if there is no space to hold up a phone, I fix my eyes on the flashing map above the doors.

For some reason, when I am in Singapore - more so than in any other country - I have the feeling that I am being watched by a silent jury of commuters.

So I studiously avoid eye contact and almost never sit down: Deciding whether or not I should give up my seat is anxiety-inducing (Is she really pregnant? Has he come to terms with the fact that he looks elderly? Surely that eight-year-old doesn't need a seat?)

But I like being on trains, for all the dreariness that commuting sometimes involves, and I don't think my time spent on them is entirely wasted.

We need more creative re-imaginings of the cityscape, imaginings that liberate the artist and allow her to negotiate her feelings about Singapore on her own terms. Rather than simply react to what already is, why not imagine what it could be?

When the train isn't too crowded, it becomes a comforting buffer zone filled with just you and your thoughts - a much-needed decompression chamber between work and home.

And with an assortment of eclectic characters, it becomes an interesting place for people-watching.

I've seen artists fiddling with calligraphy pens, a woman teaching her daughter to write in Arabic, and people using sign language, and have eavesdropped on schoolboys delighting in intellectual posturing.

"Ernest Sng isn't Ernest Sng. The concept of Ernest Sng extends to the things associated with Ernest Sng," I heard one junior college student proclaim to another.

I am fascinated by that rare breed of Singaporean that still reads books on the train - be it that middle-aged woman poring over Atul Gawande's Being Mortal, or the slim, scholarly man approaching the final pages of Learning To Die In The Anthropocene on the East-West Line. Furtive glances at other people's book covers have revealed all manner of material from chick lit to holy scripture.

You start wondering about people's personal histories, how they acquired their accents, what got them where they are today. Before you know it, you weave fanciful narratives to justify these first impressions. Then they leave the train, and the musings scatter.

These fellow passengers are "each a glimpse and gone forever", to lift the last line of Scottish poet Robert Louis Stevenson's From A Railway Carriage.

Or, as one might say in Chinese, it is a case of ca jian er guo, shoulders brushing as we pass one another by.

How many potential friendships have we missed out on without even knowing it?

Some fleeting encounters haunt my mind.

Last December, a young woman in a black cosplay outfit vanished into the bowels of the Circle Line - only to re-appear a week later in Bugis Junction, near where I had just finished an assignment. It was her, all right: There was no mistaking that cropped hair and neck tattoo. I don't know who she is or where she was going to, and I suppose I never will.

And several months ago, to my amusement, a woman stopped me on the MRT and asked: "Are you the dentist?" Not a dentist, but the dentist.

It's "strange" incidents like these that make life interesting.

For dreamers like me, it's heartening to see the speculative fiction genre - of the likes of Nuraliah Norasid's The Gatekeeper - gain traction in Singapore, a counterpoint to the stark realism that has defined our literary landscape for so long.

We need more creative re-imaginings of the cityscape, imaginings that liberate the artist and allow her to negotiate her feelings about Singapore on her own terms. Rather than simply react to what already is, why not imagine what it could be? 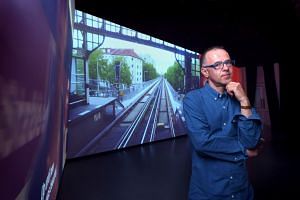 Connect with commuters from 18 cities in immersive Life Underground exhibition

For now, I shall continue to dream of long-abandoned subterrannean stations, spectral passengers, and dwell on the idea of converting old carriages into classrooms like they did in Totto-Chan: The Little Girl At The Window.

The sunlit depths of Bras Basah station, buried 35m below ground level, are also a source of endless fantasy.

If we won't put away our smartphones to speak to one another on the train, perhaps we ought to do so simply for the sake of losing ourselves, every so often, in that slipstream of dreams and daydreams.

A version of this article appeared in the print edition of The Sunday Times on September 17, 2017, with the headline 'Journeys in my mind on the daily MRT commute'. Subscribe
Topics:
More
Whatsapp Linkedin FB Messenger Telegram Reddit WeChat Pinterest Print Purchase Article Copy permalink