A human figure "leaps" across the Singapore River in an art installation inspired by the island state's rapid development.

"I've always seen Singapore as fast-running and jumping into the future," says Turin-born artist Angelo Bonello, who created a series of LED figures in different stages of a leap, which come aglow in succession.

His artwork, Run Beyond, has been installed on Elgin Bridge - one of six bridges on the Singapore River and in the Marina Bay area that will be decked with light art installations during the i Light festival, an annual sustainable light art festival.

The i Light Singapore - Bicentennial Edition runs this year from Monday to Feb 24 and kicks off islandwide bicentennial activities to commemorate the 200th anniversary of the arrival of Sir Stamford Raffles, the founder of modern Singapore.

In keeping with the festival's theme Bridges Of Time, light art installations will be on display at the Esplanade Bridge, Elgin Bridge, Cavenagh Bridge, Anderson Bridge, Jubilee Bridge and Helix Bridge.

At Jubilee Bridge, hundreds of vertical flags will be illuminated by kaleidoscopic lighting, and on the ground below Esplanade Bridge, information relating to Singapore and the world - ranging from population figures to the number of e-mails sent - will be projected in real time. 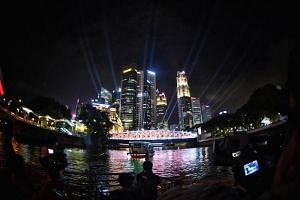 Bicentennial activities set to kick off

Festival director Jason Chen, Urban Redevelopment Authority director for place management, said "connection" was a key motif for the festival, which has over 30 light art installations and a multimedia show. They are created by artists from 15 countries, including Singapore.

"This connection is about how we have seen people coming to Singapore before 1819 and after 1819, forming communities... and how these individuals were able to prosper in Singapore, setting up their homes here. They also reached out to the world and the region," he said. The theme Bridges Of Time helps convey this.

Perception3 artist Regina De Rozario said: "One of the key themes we were interested in was the idea of narratives, and how layered narratives are... not just historical narratives, but personal ones."

• Take part in the guided and self-guided tours during i Light Singapore and view the artworks on foot and by boat. Go to www.ilightsingapore.sg/ Discover/Light-Tours for more info.

WHAT: Information relating to Singapore and the world - ranging from population figures to the number of e-mails sent - will be projected in real time onto the ground below Esplanade Bridge, in this installation by the Netherlands-based multidisciplinary studio Donis.

WHAT: Hundreds of vertical flags flap in the breeze while illuminated by kaleidoscopic lighting. It is the creation of French artist Sebastien Lefevre.

The Time Vortex (above)

WHAT: Pedestrians on the bridge will be surrounded by lights whizzing through "space" in this installation - conceived by the Netherlands-based design duo Paul Vendel and Sandra de Wolf - which plays with the idea of time travel.

WHAT: A human figure takes a bold leap across the Singapore River in this installation by Turin-born artist Angelo Bonello as a series of LED figures come aglow in succession.