Changi beach was back to its normal state yesterday, with no sign of the black goop on its shore and in its waters.

And whether it was for some sun or a glimpse of airplanes landing, beachgoers were back in force there, including the 800m stretch that reopened yesterday after a massive cleanup exercise.

Stretches of the beaches at Changi, Punggol and Pasir Ris had been polluted with a black, tar-like substance after two container vessels collided off Pasir Gudang Port in Johor last Tuesday night, releasing 300 tonnes of oil into the sea.

More than 200 personnel were needed for the cleanup, and volunteers were also out in force.

Yesterday, the last of the cleanup operations were completed at Changi beach and Pulau Ubin's Noordin beach.

The National Environment Agency (NEA) said it has been monitoring the seawater at Changi, Punggol and Pasir Ris beaches. 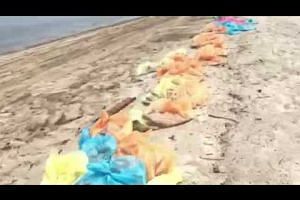 "Test results have shown that the seawater quality is normal," the agency said, adding that it will continue to monitor the water quality.

The damage was felt by fish farmers as well, with some farms reporting fish deaths.

The Agri-Food and Veterinary Authority has suspended sales at 12 fish farms until food safety evaluations are complete.

NEA contractors used oil absorbents - which look like large swathes of cotton wool - to remove the oil from Changi beach, as did National Parks Board volunteers and contract workers at Chek Jawa, where oil-stained seaweed and sand were also removed.

"I like this place because it is windy. It is good the Government has done the cleanup and people can come back to enjoy the environment here," he said.

A version of this article appeared in the print edition of The Straits Times on January 09, 2017, with the headline 'It's back to the beach after oil spill cleanup'. Subscribe
Topics:
More
Whatsapp Linkedin FB Messenger Telegram Reddit WeChat Pinterest Print Purchase Article Copy permalink