Italian oven-baked creamy mushroom pasta, wakame udon soup, Tunisian lamb kebab, claypot chicken rice and Thai laksa are some of the dishes students are tucking into in schools these days.

Some even end their meals with a dessert, such as a delightful serving of panna cotta, an Italian dish made with double cream.

More novel food concepts are being tried out in school canteens over the past few years, amid demand for a wider variety of cuisine. Lianhua Primary School, Raffles Institution and Meridian Junior College (MJC) are among schools offering them.

At Jurong West Secondary School, for instance, a stall sells Japanese favourites like teriyaki chicken and curry chicken dons as well as garlic fried rice and wakame udon soup. Each main course costs $2.50. Side dishes such as saba fish, miso soup, chikuwa skewers and takoyaki cost between 50 cents and $1.50.

Stall vendor Gary Ho who has more than 10 years of culinary experience, including cooking at hotels, said some students would return to his stall during almost every recess and order the same dishes. 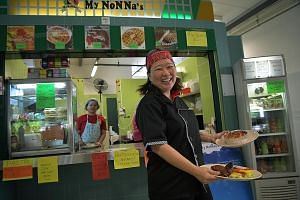 A bold purpose behind My Nonna's 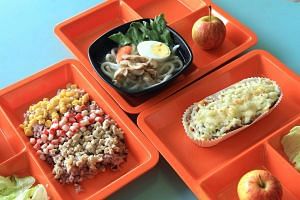 Culinary delights from around the world

The 36-year-old, who also used to run a stall in Lau Pa Sat selling pastas and salads, started the canteen stall at the beginning of this year. The hours are more stable, and he gets to spend more time with his family, especially his three-month-old son.

Students these days have different expectations of school food, having been exposed to a variety of cuisine since young.

MJC principal Lim Yan Hock said students now have more choice. "The options they have are similar to what they see in hawker centres."

Students are also spending more time in school, due to commitments such as co-curricular activities, Mr Lim said. His school has eight canteen stalls, including one which sells Mediterranean food. There are also stalls selling Muslim food, Western cuisine and Chinese fare.

Lianhua Primary pupil Yang Xue, 11, appreciates the variety at her school, which has an international cuisine stall. "It gives us more choices and makes school food interesting," she said.

Lianhua Primary vice-principal Tan Hui Ping said some pupils at her Bukit Batok school may not have tried food items from other cultures. "Through the canteen stalls, they are exposed to different cultures. Food also brings these pupils together."

Meals from school canteens typically cost about $3 or less.

The introduction of novel food concepts in canteens comes even as schools place a greater emphasis on getting students to eat right.

Some vendors have taken much effort to ensure healthy meals look - and taste - similar to the original versions, while others source for healthier ingredients and include them in their dishes.

Many stalls, for instance, use the healthier brown rice, and include decent portions of vegetables and fruits. Also, some use airfryers to make snacks like chicken wings.

Responding to queries, the Ministry of Education said almost all schools, from primary schools to junior colleges, have adopted the Healthy Meals in Schools Programme, where canteen stall operators must serve healthier food.

"Their top priority should be to offer healthy, affordable and tasty food to the students," she added. "The availability of cuisine choices in school canteens is a bonus."

A version of this article appeared in the print edition of The Sunday Times on May 14, 2017, with the headline 'Italian pasta, Tunisian kebab - all at school'. Subscribe
Topics:
More
Whatsapp Linkedin FB Messenger Telegram Reddit WeChat Pinterest Print Purchase Article Copy permalink