SINGAPORE - A young champion for interfaith work has received The Straits Times Singaporean of the Year award for 2018.

Ms Siti Noor Mastura, 28, who co-founded non-profit organisation Interfaith Youth Circle, beat 10 other finalists for the award, which is now into its fourth year.

Organised by The Straits Times and sponsored by UBS Singapore, the award honours Singaporeans who have put the country on the world map, persevered through incredible adversity or made the community a better place through selfless acts.

Interfaith Youth Circle, founded in 2015, seeks to promote a better understanding of the role that faith groups can play in an increasingly complex and divided world.

It conducts monthly Scriptural Reasoning sessions where people discuss religious texts from different faiths but of the same theme.

It also runs campaigns like Break Bread Build Bridges, which encourages people from a community who celebrate a religious festival to host someone who is not from that faith but would like to experience it. Muslims open their homes to celebrate Hari Raya Aidilfitri with strangers from other religions and Christians do the same during Christmas.

Ms Noor Mastura also started in 2013 non-profit group Back2Basics, which delivers free halal groceries to the doorsteps of beneficiaries such as the home-bound elderly and single mothers.

President Halimah Yacob presented her with a $20,000 cash prize and a trophy at a ceremony at the Istana on Tuesday (Feb 12).

Said Ms Noor Mastura after receiving the award: "Honestly, I suffer from imposter's syndrome so I don't think I am fully deserving of the award."

She added: "Every one of us has the capacity to do great things. How do you decide what is more heroic and what is more generous?"

In her speech at the award ceremony, Madam Halimah said The Straits Times Singaporean of the Year Award shows that Singaporeans are not passive bystanders to the plight of others, whether these occur in Singapore or elsewhere.

"The daily humdrum of our existence, mired in work and other responsibilities, has not deadened our souls and we find nourishment in helping others," she said.

"The human spirit remains undaunted and the stories of the nominees are clear examples of how all of us can do something for the betterment of others, so long as we have the heart to do so. We don't have to wait for others to show the way."

Madam Halimah said she is glad that this year's event was held at the Istana, as it celebrates 150 years this year.

"Even as we remember our past legacies, we constantly strive to create new memories too. The Istana has been celebrating the achievements of Singaporeans in so many different fields, such as social workers and teachers, and this is a fitting addition to recognise our extraordinary Singaporeans," she said.

They were picked from a total of 74 individuals or groups of individuals who were nominated. 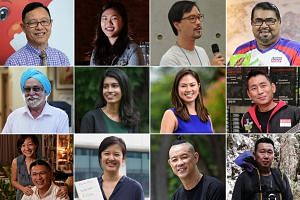 Singaporean of the Year: People who make a difference

Fourteen judges went through three rounds of selection to decide on 11 finalists. The public also took part in the online readers' choice segment.

The judging panel includes editors from The Straits Times, as well as figures such as social entrepreneur and activist Saleemah Ismail, chef and restaurateur Willin Low and poet and civil servant Aaron Maniam.

The inaugural award for 2015 went to Madam Noriza A. Mansor, for helping an elderly Chinese man who had soiled himself in public, while Singapore's first Olympic gold medalist Joseph Schooling and his parents Colin and May won in 2016.

The 2017 award was given to Dr Goh Wei Leong and the charity he co-founded called HealthServe, which provides migrant workers with affordable healthcare.