Efforts to integrate community health and social services for those who are at risk of hospital readmission have grown in recent years.

Staff from CareHub will make a call to patients within 48 hours of discharge to ensure that they are managing well and to check that they are taking their medicine or taking appropriate action. Additional support, such as a phone consultation, can also be provided if issues such as giddiness or insomnia emerge.

CareHub has served 7,698 patients as of January this year, though NUHS does not have data on how many of them are rental flat residents.

The initiative proved to be a success in a pilot conducted from July to November 2016 that involved 270 heart failure patients from the NUH Heart Centre.

After they were linked up with CareHub, the number of emergency admissions to hospital due to sudden cardiac-related conditions dropped by 39 per cent, said Associate Professor John Wong, senior director of NUHS' CareHub.

In the east, another scheme run by Changi General Hospital (CGH) and the South East Community Development Council has also seen results. Under the scheme, known as Neighbours for Active Living, volunteers are trained by CGH to care for the vulnerable elderly living near them. 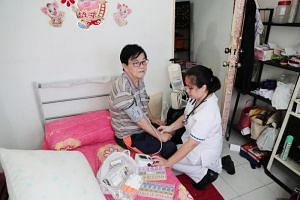 A study of 3,596 people who were recruited into the programme between August 2013 and December 2017 found that the average number of hospital admissions dropped from 2.3 to 1.1 over a six-month period for about three-quarters of the group.

Participants attend a day club programme at least once a week, and take part in activities such as art, music and exercise classes. A fifth of the 35 seniors who currently attend the programme at the centre are rental flat residents.

All of EPICC's clients were those who were frequently admitted to hospitals when they were first enrolled. But most of them were no longer so by the time they completed the programme, said Mr Don Tan, 42, a senior social worker at the centre.

The clients are enrolled in EPICC for an average of three years.

It can be difficult to convince some clients to regularly attend these programmes, said Mr Tan, citing the example of one who refused to participate for weeks until volunteers struck up a friendship with her.

"Getting people to change their lifestyle and habits is not easy, but it helps when we establish an emotional connection and provide them with a sense of security and assurance when they come here," he said.