SINGAPORE - A barbecue at East Coast Park nearly four years ago was where two men hatched a plan that spawned a series of sham marriages between Singaporean men and Vietnamese women.

In all, 17 people were involved, among them the mastermind, Jeremy Tan Chin Hock, unemployed, and seven fake married couples.

Immigration and Checkpoints Authority (ICA) officers began investigations into the syndicate in March last year (2017) after receiving a tip-off about one of the couples.

Assistant Superintendent Ong Teck Wee, 37, a lead investigator, told The Straits Times that a crucial part of the case was getting a confession from the first couple. After that, the officers were able to uncover the other sham unions.

As for the Vietnamese women, aged between 22 and 28, they paid Tan and his marriage brokers between $6,000 and $16,000 so they can continue to stay in Singapore.

But the law eventually caught up with Tan and his syndicate.

On Jan 16 this year, Tan, 32, was sentenced to 24 months' jail and fined $42,000 for offences under the Immigration Act. The sentence meted out to him was the stiffest following an amendment to the Immigration Act in 2012 to criminalise marriages of convenience (MOC).

Besides Tan, 11 others - six Singaporean men and five Vietnamese women - have been jailed between six and 18 months.

As for the remaining three people, two women had left Singapore before investigations commenced, and one man was not charged due to a medical condition.

Tan told Quek, unemployed, that he would be paid $800 if he entered into a marriage of convenience with Le. Quek would also have to sponsor Le's application for visit passes to extend her stay in Singapore.

Quek agreed, and after entering the sham marriage, he went on to help Tan and the other two brokers to arrange five sham marriages between February and April last year. 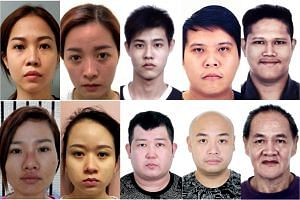 All the couples did not live together, but were told to learn more about each other's background to avoid detection by enforcement agencies, said ICA officers who cracked the case.

In one case, Tan even flew the man to Vietnam to better understand his potential spouse's family background.

ASP Muhammad Izzat Abdul Rahman, 30, a lead prosecution officer on the case, said a challenge of the case was to gather evidence.

"It was hard to uncover the overall narrative because different people might say different things. For MOC cases in general, especially a syndicated case, evidence is not as forthcoming as other immigration offences such as overstayers. It requires more effort to be able to unearth the evidence (against the culprits)," he said.

He urged members of the public to do their part if they suspect something is amiss.

"If something seems off, if you have any suspicions, you can just come forward with what you have... When we investigate cases of suspected MOC, we investigate them thoroughly before we take any prosecution action."