The number of scholarships to be given out next year by the Infocomm Media Development Authority (IMDA) will be doubled to 100, as part of Singapore's push towards a digital economy.

At the same time, the three types of scholarships - the National Infocomm Scholarship, Media Education Scholarship and Infocomm Polytechnic Scholarship - will be merged under the new Singapore Digital (SG:D) Scholarship.

"This will ensure alignment in our efforts to nurture a pipeline of future infocomm media leaders, and build a strong foundation for our digital economy," said Minister for Communications and Information S. Iswaran at the National Infocomm Media Award yesterday.

He said the SG:D Scholarship will also support postgraduate scholarships in areas such as artificial intelligence and immersive media.

Its scope, and that of the IMDA's Industry Preparation for Pre-graduate (iPrep) programme, will be expanded as well to include arts, design and media courses.

"In addition, iPrep will go beyond courses and certification to fund overseas exposure such as competitions and study trips," said Mr Iswaran, adding that the change will benefit about 2,500 students in the next two years.

Singapore needs to develop a "deep pool" of talent in the infocomm media sector, he added. 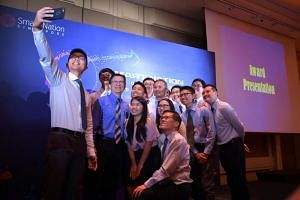 Currently, the economy employs about 200,000 infocomm and media professionals, and demand for them wouldcontinue to grow as the global economy becomes increasingly digitalised, Mr Iswaran said.

He also set out why Singapore needs a globally competitive infocomm media sector, saying it is a way to foster greater inclusivity in our economy, enhance public services to deliver high quality service to citizens and ensure a competitive economy.

The event at the Grand Hyatt Singapore hotel saw 54 people receiving scholarships to study at polytechnic, undergraduate and postgraduate levels.

Among them was Straits Times video editor Ng Kai Ling, who is pursuing a Master of Arts in Journalism at New York University's Graduate School of Arts and Science.

Previous recipients of the scholarship include Mr Alvin Lee, whose film Seed won him Best New Director at the China Short Film Golden Hummingbird Awards in 2016; and Mr Anthony Chow, chief executive of smart lock solutions firm Igloohome, which sells its products in more than 80 countries.

A version of this article appeared in the print edition of The Straits Times on September 26, 2018, with the headline 'IMDA to double number of scholarships to 100'. Subscribe
Topics:
More
Whatsapp Linkedin FB Messenger Telegram Reddit WeChat Pinterest Print Purchase Article Copy permalink