The imam who made controversial remarks against Christians and Jews earlier this year visited the synagogue in Waterloo Street yesterday to offer his apology .

Imam Nalla Mohamed Abdul Jameel, 47, extended his unconditional apology for his offensive remarks, and acknowledged that he must bear full responsibility for his actions. The visit came two days after he apologised at a gathering of leaders of various faiths.

Yesterday, the imam also presented Rabbi Mordechai Abergel with a copy of the open statement of apology which he delivered last Friday at the Harmony in Diversity Gallery in Maxwell Road.

On behalf of the Jewish community here, Rabbi Abergel accepted the imam's apology at the Maghain Aboth Synagogue.

The rabbi said the Jewish and Muslim communities here have a "very harmonious" relationship, with strong bonds of friendship. "This sends a message that these bonds are not affected, and we share so much more than what divides us," he added. 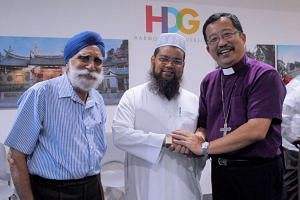 Imam apologises for insensitive remarks, clarifies that remarks were not from Quran 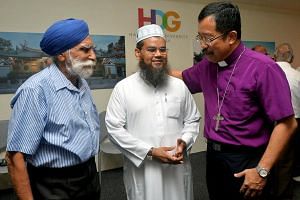 In February, a video of the imam reciting a prayer in Arabic that said "God help us against Jews and Christians", among other things, was circulated online. The imam clarified last Friday that the additional supplication he read was not from the Quran, but an old Arabic text originating from his village in India.

At a separate community event in Marsiling yesterday, Speaker of Parliament Halimah Yacob said the imam's apology last Friday is a "positive move" that should be taken into consideration. "He apologised, he gathered together all the people from different faiths, and it was a great initiative on his part," she said.

Last Friday's meeting where the imam apologised before leaders of various faiths, including Christian leaders, was organised at his request. He said he was "filled with great remorse for the inconvenience, tension and trauma that I have caused to this peaceful country".

After the controversial remarks surfaced, Home Affairs and Law Minister K. Shanmugam said the Government will not tolerate preaching that encourages violence or seeks to pit one religion against another.

On Saturday, Mr Shanmugam said the police have completed their investigations on the matter and submitted a report to the Attorney-General's Chambers, adding that a decision is expected within a few days.

The imam's apology was welcomed by the Muslim community and leaders of other faiths, Minister-in-charge of Muslim Affairs Yaacob Ibrahim noted on Saturday.

Yesterday, Madam Halimah said of the imam's apology: "He realised what he did was a mistake."

"He also realised that what he had lifted from his home town in India may not be so applicable here. Probably, he didn't know, or quite understand, the context of Singapore society," she added. "We are multiracial, multi-religious, and you need to understand that is important."