SINGAPORE - The man whose car was crushed by a trailer in the Tuas tunnel on Wednesday (April 19) afternoon has posted a new video of the extremely close shave.

The new clip he shared on his Facebook page has been viewed more than 3,000 times in just an hour. It shows the trailer veering suddenly towards his vehicle before the footage ends in a blur.

The 45-year-old service engineer told The Straits Times on Friday (April 21) that his friends and family were stunned by the accident when they saw the picture of the crushed vehicle.

Asked how he survived, Mr Wong said: "I don't know." He laughed and added that it was "very miraculous". 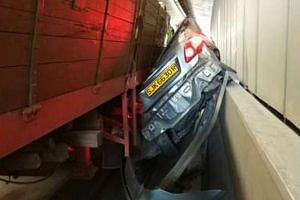 He had been on his way to meet a customer when the trailer suddenly cut into his lane, he said.

"(My car) was dragged from outside to almost halfway inside the tunnel," said Mr Wong.

The only injuries he sustained were bruises on his fingers, he said, which he got while he was trying to find his phone.

He was stuck in the car for a while, and some workers came to ask if he was alright, he said.

"At first when I came out from my car I was still not so scared, just a bit blank and went into the ambulance," said Mr Wong. "I didn't realise it was so bad until some of my friends told me about the picture afterwards and told me it's so bad. Everyone is very stunned after seeing the picture."

He said he intends to continue driving, as he needs to do so for work. However, he is trying to settle his insurance claims. As the trailer was a Malaysia-registered vehicle, this is tricky, he said.

"It's very hard to claim from them," said Mr Wong. "Insurers told me I must claim from my own insurance to get back the market value of the car."

Mr Wong posted photos and another video of the accident at 9.17am on Friday.

He wrote: "Thank God, I've managed to survive this accident. And thanks to my family members and friends for their concern. Drive safe and be happy always."

ST has contacted the police for more information.