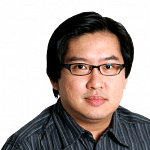 Hundreds braved the rain, and one person even started queuing from 4:30am this morning, just to get their hands on the brand new Samsung Galaxy Note 3 smartphone and Galaxy Gear smartwatch.

Those who pre-ordered the $1,048 smartphone through the telcos and Samsung stores also received $100 off the $488 price of the smartwatch, on top of getting a dock and an extra battery.

When the Galaxy Note 3 is paired with the Galaxy Gear, users will be able to answer and make calls with the watch, receive notifications and even take photos using the watch, and have them saved on the phone.

Smartwatches are expected to be the new domain that tech companies are fighting over, with many coming out with smartwatches that can pair with the current crop of Android and Apple devices.

Samsung is not the first smartphone maker to come up with its own smartwatch, but its watch has several key features, such as the ability to make calls and snap photos.

All three telcos and Samsung declined to reveal sales figures from this morning, but a Samsung spokesperson said that the number of consumers who registered their interest for the phone prior to the launch was more than double that of the Samsung Galaxy Note II With LTE when it was launched in October 2012.