SINGAPORE - Some 5,000 consumers who queued to buy the discounted Huawei Y6 Pro smartphone last Friday (July 26) but walked away empty-handed will be able to buy it at an even cheaper price than the few who snagged one at the promotional price of $54.

Huawei said in a statement on Tuesday that it will be giving $100 vouchers to those that had registered at its stores to purchase the phone between July 26 and 28, the planned period of the promotion. The offer ended on the first day after supplies ran out.

The vouchers will allow customers to buy the Y6 Pro for $48 instead of its current retail price of $148, Huawei said.

Asked why advertisements for the promotion last week listed the phone's usual price as $198, a spokesman clarified that the price was reduced to $148 on July 13 as part of a National Day promotion, which will remain in place until the end of September.

Huawei representatives will contact the 5,000 individuals within two weeks from Aug 2. The company is working to ensure sufficient inventory to accommodate demand, the statement added.

The Chinese phone maker, which had previously declined to reveal the number of units available at each of the 27 outlets participating in the promotion, said on Tuesday that it had about 2,000 handsets in total for the promotion.

On why some customers were told that stores had as few as 20 units, Huawei said that each store was given a different allocation based on their past sell-out records. 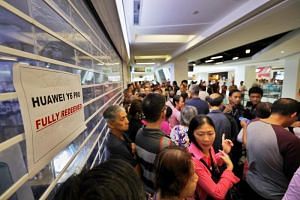 "Certain retailers, for example, Courts and Challenger, would have approximately 100 sets for their respective stores, and some heartland stores would have 20 to 30 sets."

Huawei apologised for the "disappointment and distress caused to our customers over the weekend", and said that it had clearly underestimated demand.

"We did not carefully consider our customers' well-being enough and should have been better prepared for this promotion," it said.

The promotion, which slashed the price of the Huawei Y6 Pro 2019 from $198 to $54 for Singaporeans and permanent residents above the age of 50, was supposed to run from last Friday to Sunday but was cut short when the phones sold out almost immediately.

Police had to be called in to manage crowds at several locations and a 53-year-old woman was arrested for causing a commotion inside a Huawei store in Jem shopping mall when she was unable to purchase the phone.

The Advertising Standards Authority of Singapore said on Tuesday that it was looking into whether Huawei had breached industry guidelines in its promotion of the deal.

The Consumers Association of Singapore (Case) contacted the Competition and Consumer Commission of Singapore on Monday to discuss potential action against Huawei, after Case president Lim Biow Chuan described their advertisement as misleading for not making clear that stocks were limited.

Huawei said in response to the allegations that its legal team is handling the matter with authorities.

"We are truly sorry for all the distress that was caused and we will be sure to be more mindful of our plans in the future," the firm said.