SINGAPORE - More residents have come forward saying tiles in their Housing Board flats popped and cracked over the weekend, with 38 cases reported in one Woodlands estate alone.

Mr Lewis Sua, who lives in Block 688C, Woodlands Drive 75, told The Straits Times that there were at least 14 flats affected in his block alone, and 38 if he included flats from the surrounding blocks.

"On Sunday, one of my neighbours came and asked around if anyone was affected," Mr Sua, 37, said. "When he came to my unit, the tiles were still OK. But five to 10 minutes later, my wife went to the kitchen and we started to hear firecracker sounds - the tiles in our living room popped."

Mr Sua, who is a condominium estate manager, said about half the tiles in his living room have popped and cracked, exposing the cement underneath. The tiles were laid by HDB, he said.

"I think it's not just the weather. I'm guessing it's a structural issue. Of course the weather plays a part but if the workmanship is good, it will be able to withstand it," he said.

"On Monday, our whole group went to the MP, Vikram Nair, who said we will have a dialogue with HDB."

Mr Sua said HDB told him that his flat was 15 years and two months old. This is over the 15-year warranty-cum-grace period that HDB offers.

Jurong West resident Maggie Khoo, who is her 70s, told ST that the tiles in her flat at Block 655A cracked with an "explosive sound" on Dec 31 last year.

Madam Khoo made repeated calls to HDB in the first few days of January.

Holland-Bukit Timah GRC MP Liang Eng Hwa told ST that he intends to make a proposal to the Ministry of National Development (MND) to ask if HDB can offer microloans to a specific group of residents.

These residents are those whose flats are older than 15 years, and who do not qualify for lower-income subsidies but are unable to afford the repairs that can cost up to $8,000, Mr Liang said.

"I hope HDB can offer microloans and the residents can pay it back over a period of time," he said.

He oversees the Senja, Jelapang and Segar areas in Bukit Panjang, where residents have reported cases of popped tiles. 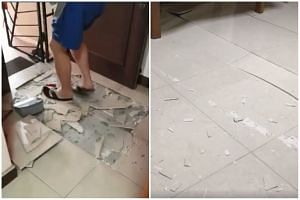 Reports of tiles popping and cracking in flats across Singapore; HDB aware of cases 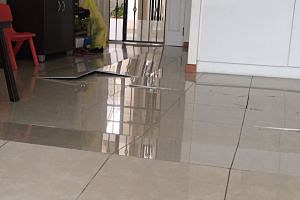 Increase in reports of popped tiles, about 700 cases in first half of January alone: HDB

Mr Liang did not attribute the recent spate of cases to the cool weather as some home owners have, but instead said it was "wear and tear". He said awareness of the issue may have led to some residents seeking help for it, too.

HDB said in a Facebook post on Monday that it was aware of the reported cases. It said residents can call its branch hotline on 1800-225-5432 for advice, or the Emergency and Maintenance Services Unit, details of which are listed on lifts at each block.

Several people commented on HDB's post, saying they had experienced similar incidents in their homes in areas like Woodlands, Sengkang and Punggol.

Mr Liang, along with Mr Nair, had asked the Minister for National Development about popped tiles in Parliament last year.

MND said in its response that "in the past two years, HDB received about 2,000 cases of dislodged floor tiles per year".

This works out to a nationwide yearly average of about two cases per 1,000 dwelling units, or 0.2 per cent per year.

In response to ST's queries, HDB said on Tuesday night that it has seen an increase in reports of popped or dislodged tiles in flats, with about 700 cases reported in the first half of this month alone.

About half the cases reported involved tiles that had been laid by home owners themselves. HDB laid the tiles in the other half.

HDB said that this is "consistent with the experience of previous years, where there tends to be a higher number of feedback on the dislodgement of tiles during the colder months".