Yesterday, the HDB announced it is one of three blocks in Geylang town that have been picked for the Selective En bloc Redevelopment Scheme (Sers), the first such project announced since August 2016.

"I am really happy because we get to move into new flats," said Mr Chong, 48. "When I bought this flat, it was already quite old."

His flat has 49 years left on the lease. His bet that there could be a Sers exercise down the road has paid off, and he will use the compensation to renovate his new flat.

Slated for redevelopment are Blocks 81 to 83 MacPherson Lane, comprising 313 flats that are around 50 years old, along with 27 shops with living quarters and two eating houses. The last Sers project in 2016 involved eight blocks in West Coast Road.

Compensation will be based on market value at the time of the Sers announcement. Based on recent market transactions of comparable flats, the estimated compensation ranges from $210,000 to $260,000 for two-room flats, and $290,000 to $330,000 for three-room flats, the HDB said. 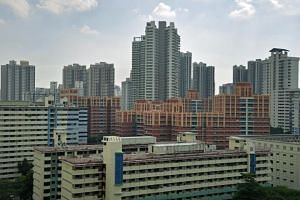 There is still value in older HDB flats: Lawrence Wong 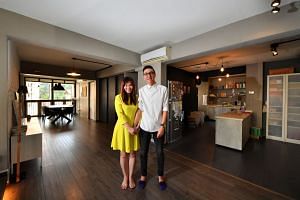 On top of market compensation, flat owners will be paid reasonable expenses, which comprise a $10,000 removal allowance, and stamp and legal fees to buy a replacement flat of equivalent value to the Sers flat.

Eligible Sers flat owners can also opt for an ex-gratia payment of up to $60,000 on top of the compensation for their flats, instead of the Sers rehousing benefits.

Some will miss their old quarters. Mrs Lim Ah Jo, who is a cleaner, said she is "quite attached" to her three-room flat at Block 83, where she has lived for 30 years.

Minister for National Development Lawrence Wong wrote in a blog post in March last year that only 4 per cent of HDB flats have been identified for Sers since 1995, and selection criteria remain strict. Replacement flats, located near MacPherson MRT station and the Pan-Island Expressway, will start getting built in the third quarter of next year and are expected to be completed by the second quarter of 2023.

Meanwhile, the owners of the 27 shops and two eating houses will be compensated based on their units' prevailing market value, which is estimated to range from $850,000 to $1.4 million for each shop and between $3.3 million and $3.7 million for each eating house, HDB said.

Tan & Chang Property Consultants is the appointed valuer for the commercial properties.

All affected owners will be individually informed of these plans. They will also be invited to a Sers exhibition, which will be held from tomorrow to Monday.

A version of this article appeared in the print edition of The Straits Times on June 01, 2018, with the headline 'Three MacPherson blocks to be replaced under Sers'. Subscribe
Topics:
More
Whatsapp Linkedin FB Messenger Telegram Reddit WeChat Pinterest Print Purchase Article Copy permalink